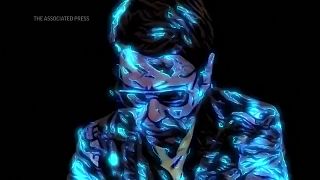 The French musician's latest album entitled ‘Oxymore’ (or in English, ‘oxymoron’) was released last week. It is a groundbreaking electronic album recorded in 360-degree immersive sound, accompanied by a surreal virtual reality experience.

It is Jarre's 22nd album, referencing the musician's first major recording, the 1976 album ‘Oxygene’, which catapulted him to fame. It went on to sell an estimated 18 million copies. This was despite it being recorded in a makeshift studio at home.

However, Jarre says he "isn’t interested" in what he’s done before. He is more motivated by what new technology can bring to the scene.

“I’m not that interested by technical technology for the sake of it. But just being like a sponge or a thief by hijacking some existing tools as a kind of bad boy, in a sense,” he said, speaking in a recent interview from Paris.

Jarre has set records for the biggest concerts in the world.

A 1997 concert in Moscow drew 3.5 million spectators, something he describes as an "accident".

It was shedding his ego, something he learned early on, he says, that helped him be able to constantly move forward. He adds that he always considers himself “part of a bigger picture,” rather than just an individual entity.

And now, his interest lies in the metaverse, finding new and interesting ways of performing live. "With electronic music performance, we should find a kind of visual interface with the audience”, he says.

“And then it became now a kind of standard. You had all electronica, and even the rock or pop acts now are using massive, massive visual effects.”

'Oxymore' is out now and you can see more about it in the video above.

Robberies & ransoms: Artists who have had their music stolen from them