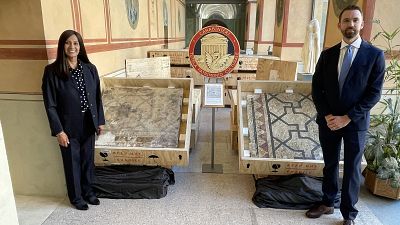 The FBI has returned an ancient mosaic to the Italian government that has been missing for over a century.

The mosaic, which depicts the snake-haired Medusa, is believed to be 2,000 years old, dating back to ancient Rome.

The FBI came into possession of it when an American owner contacted them. They were unable to sell the mosaic - which had been broken up into 16 parts - because they had no documents to prove its ‘provenance’.

The owner made contact in 2020, by which time the 16-pieces had been stored in a Los Angeles storage facility for around 40 years. It was then up to the FBI Art Crime Team to put the pieces together regarding the origins of the artwork.

How did agents crack the case?

Special Agents Elizabeth Rivas and Allen Grove got to work on investigating the mystery straight away.

Local experts assessed the mosaic to be Italian or North African in origin, and after establishing contact it wasn't long before the equivalent body in Italy - the Carabinieri - established contact.

The Carabinieri's art squad confirmed the mosaic was Italian and that it had been entered into cultural property records in 1909. The only other record since was a 1959 newspaper ad in Los Angeles advertising its sale.

The artwork was then carefully packaged and shipped to its homeland in Italy, where it arrived safely in April 2022 and is now in the hands of the Italian government.

“The mosaic was handcrafted from an age where people put an amazing amount of care and effort into it. It really speaks to the ingenuity and creativity of the time,” says Grove.

“It's not meant to be in Los Angeles. The mosaic belongs to the people of Rome. It allows us to understand a bit about the history of humans 2,000 years ago.”