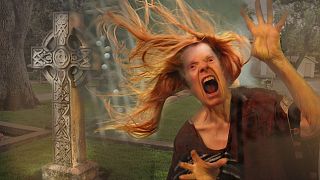 Today is the turn of Ireland and the banshee.

A ghoulish harbinger of doom or a friendly warning from a departed loved one?

The banshee is integral to Irish folklore and a strong part of Gaelic tradition.

These monsters come in different shapes and sizes, but their mystical powers always stem from the unique sounds they make.

What is a banshee?

Opinions differ on what exactly the banshee looks and sounds like, but one thing is for sure - their presence is always linked to death.

Some say the banshee is fair haired, some say silver and others say they are redheads. Some people think that banshees are tall and graceful, while other people say they are haggard and old with rotted teeth.

The banshee is however always a woman, and their voice is always a harbinger of doom.

It is said that the banshee’s wail is the sign of an untimely death; whether the sound is heard by everyone or only the dying person is up for debate.

The wail can be either an unearthly shriek or sometimes a mournful song meant to soothe the doomed individual. Sometimes the song is heard by the deceased’s family in the first warning that they have suffered a loss.

Most tales say that the banshee's voice only warns of imminent death but some say that their shrieking is intended to harass individuals and drive them to take their own lives.

What is the origin story of the banshee?

Stories of banshees date back to the 1200s and relate to soldiers abandoning their fellows in the forest after hearing a ghostly shrieking in the woods; their left-behind companions usually died.

The word banshee can mean ‘fairy of the mound’ and relate to the mounds that litter the Irish countryside, left there to mark ancient graves.

However, the banshee may also be related to keeners - women who sang mournfully at funerals in agrarian Ireland. One version of the banshee myth says that as the women accepted alcohol in payment for their lamenting they were sinful and punished by being turned into banshees.

There are several tales of banshees that relate to specific historical figures and family trees. It is thought that originally there was one banshee for each of the four ancient Irish families, but that perhaps through various marriages they are now more common.

Allegedly King James I of Scotland was approached by a banshee in 1437 and at that time many high-profile members of Irish society said the same.

It is also often said that the banshee may be the spirit of specific murdered woman or someone who has died in childbirth, and sometimes appear washing the bloody clothes of the dead.

Whatever she looks or sounds like, when it comes to banshees, if you do see one it probably isn't good news.

The mythical creatures of Europe: Trolls