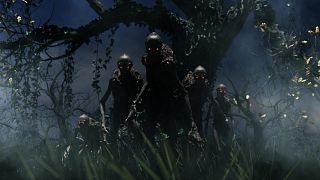 Today is the turn of Portugal and the mythical El Coco.

Despite what you may think, El Coco isn’t just the Spanish name for a hot chocolate. It’s actually the greatest source of horror for many children in Spanish and Portuguese speaking countries.

El Coco is basically the Bogeyman. It’s the tale that haunts the edges of every nervous child’s room when it’s plunged into darkness at bedtime.

The origin of the myth is believed to come from Northern Portugal and Galicia. Known as the Coco or the Cucuy, the word is derived from the word for “coconut” and refers to the head or skull of a person.

Some versions of the El Coco myth have it represented as a dragon-like figure, while others depict a dark giant with fire in its eyes. Sometimes it’s simply a hooded man.

For the most part, the fear of El Coco rests in the imagination of the one who fears it. Its shape shifting capability allows it to get closer to its victims.

Much like innocent looking politicians, it’s what El Coco is capable of that should have you quaking in your boots.

What’s El Coco up to?

Nothing good if you’re not an adult.

El Coco, like Baba Yaga, has quite the taste for children. Specifically, misbehaving children.

El Coco stalks the rooftops of neighbourhood children, looking for the badly behaved and the ones who won’t go to bed. Then, appearing from either a cupboard or under the bed, it devours them whole or drags them away to never be found again.

A nursery rhyme from the 17th century depicts the situation pretty plainly.

“Sleep child, sleep or else...

Coco will come and eat you”

Like many versions of the bogeyman, El Coco has often been used in popular culture to represent malevolent threats.

El Coco was depicted by the Spanish painter Francisco Goya in 1799 in his painting ‘Que Viene el Coco’ and even shows up in the epigraph of the Cervantes’ epic 'Don Quixote'.

In the English language, horror writer Stephen King has played around with the myth. It first appears in the ‘It’ miniseries obliquely when Pennywise refers to himself as an “eater of worlds and of children.”

Then, King featured El Coco more explicitly in his 2018 novel ‘The Outsider’ as the shapeshifting creature murdering people in a city in Oklahoma. King’s novel was adapted into a HBO series for those willing to be truly terrified.

The mythical creatures of Europe: The Banshee