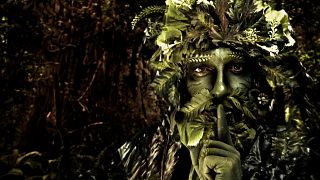 For the Euronews Culture countdown to Halloween, we’re taking a look at some of the lesser-known mythical creatures of Europe.

Today is the turn of England and it’s legendary being, The Green Man.

Origin of the Green Man

Wander around anywhere in the countryside of the UK for long enough and you might spot it. Hiding in plain sight, his face is carved into churches, he lurks in the corners of paintings, and his name even lives on in the names of pubs and a music festival.

He is, of course, the Green Man.

While he’s a mainstay of Church art across the country, the theory is that the Green Man’s origin is pre-Christian. A pagan legendary figure that has been so persistent throughout the ages that he survived the introduction of Christianity to the UK by the Romans.

Many pagan traditions looked to the importance of nature, so it’s no surprise that a figure like the Green Man shows up around forests and woodlands.

The face carved in the wood was first called the Green Man by Lady Raglan, who published a theory about him in the journal ‘Folklore’ in 1939. Before that, the face was only referred to as a ‘foliate head’.

But the legend of the Green Man is rooted in the May Day celebrations to mark the beginning of the summer. Symbolising fertility and crop health, he’s an all time good omen for those hoping for plentiful yields from their fields.

The Green Man also represents death and rebirth and the cycle of life. He’s a pretty natural bloke, really.

Why should you fear the Green Man?

With all this verdant mythology, it’s easy to imagine that the English entry to the Halloween countdown isn’t the most formidable.

While the Green Man represents rebirth, his pagan origins have placed him for a long time as a force that clashes with the Christian lives of English people.

Most of the time, the Green Man is depicted as a benevolent force, but one not to be messed: he is far more ancient than the traditional understanding of the world.

The most iconic of these culture clashes is in the Arthurian legend ‘Sir Gawain and the Green Knight’. Originating in the 14th century, Arthurian legends typically depict King Arthur and his Knights of the Round Table fighting off mythical creatures.

In the Green Knight legend, Sir Gawain plays ‘the beheading game’ with the Green Knight when the knight says that if Gawain beheads him, a year to the day, he must offer his head in return.

The Green Knight casually picks up his head after Gawain severs it and promises in a year’s time the favour will be reciprocated. The omnipotent immortal force of the Green Knight is a terrifying presence over Gawain for the following year, where he tries to act as nobly as possible.

The Green Man in media

The Green Man has been seen in tons of media from the Arthurian legend to inspiring Tom Bombadil and the Ents in 'The Lord of the Rings'.

But in recent years, there’s been a particularly great depiction.

In David Lowery’s 2021 film The Green Knight, the mythical creature is fully realised as Dev Patel’s ‘Sir Gawain’ deals with the horrific fate he has created for himself by beheading the Green Knight. It’s an incredible film of mythic proportions and foreboding terror.