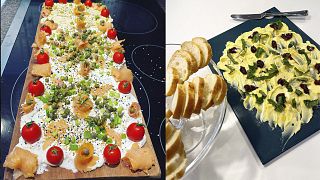 A cream cheese board, left, and a butter board. Butter boards, the polarizing stepchild of charcuterie, have taken TikTok to new food-craze heights.   -   Copyright  AP/AP
By Jonny Walfisz  with AP  •  Updated: 27/10/2022

It’s a buttery bonanza in here!

If you, like many of us, are tightening your purse strings while living costs soar, the bourgeois practice of cutting up slices of cheese and thin meats to plonk on a plank may seem impractical.

Enter the butter board.

Actually don’t - read our handy guide to everything you need to know about butter boards.

The cost-of-living crisis is affecting almost every area of normal people’s lives and one of them is the dairy industry. Cheese prices have soared.

In the UK, cheese has jumped up in price by as much as 17 per cent. That’s going to make a difference when you want to buy at least three varieties for any good cheese board.

Side note - anyone making a cheese board without the requisite three types of cheese - hard, soft and stinky - shouldn’t be trusted to organise a piss up in a brewery.

For those that want to save while still entertaining a large group with a plank of delightful delicacies, the butter board is your new saviour.

So which madcat came up with the idea?

Justine Doiron started the craze when she began churning out the boards on her TikTok and Instagram accounts.

She is credited with coining the term in a video that has her spreading it with abandon on a cutting board and topping it with, among many other things, edible flowers.

“I think the draw is that it’s super customizable,” Doiron told AP.

“You can be so creative with it, and people are always looking for something they’ve never seen before. It’s a low effort way to have some fun with food.”

She’s the sort of crazy person to name a plant butter, though.

I can’t believe it is butter

People are making all different kinds of butter boards, including vegan ones with vegetable spreads and sweet ones with buttercream frosting.

Here are some of our favourite ones.

But that’s only the beginning.

Next, for our hummus homies, is the butter board for lovers of the chickpea dip.

@healthylittlepeach If you love the viral Butter Board trend started by @justinesnacks then you are going to love this Hummus Board. #butterboard#hummustrend#hummusboard#appetizers#wine♬ Luna, amore e no - Piero Piccioni

Hit your hummus board up with chopped veg and you’ve got the Middle East’s answer to charcuterie. About 2,000 years late, but sure.

JortsKitchen read the assignment of making a cheap alternative to the cheese board and basically ignored it by putting a load of meat with it. First he goes way extra by smoking his butter; then he proceeds to add bacon and sausage to his board. One for the carnivores.

@jortskitchen This Carnivore Butter Board was DELICIOUS! Whoever comes up with these ideas is a genius. It was so easy. #butterboard#butterboards#butter#carnivore#barbecue#fyp♬ 水に流して - Édith Piaf

Speaking of people who didn’t get the note this is a cost saving exercise, Michael Finch adds truffle honey and goats cheese to his.

It’s meant to be a cheese alternative, Michael.

@michaelfinch My take on the viral #butterboard what would you put on yours?! IB: @Justine Doiron ♬ original sound - Michael Finch

Finally, for those desperate to develop type 2 Diabetes, there’s the dessert board. Madsie S just spread a load of Nutella on a board and topped it with strawberries and marshmallows.

We're not going to pretend it doesn’t look tasty, but this is starting to feel like a Nutella sandwich with extra steps.

Who’s hating on the butter board?

As always, there’s some nerd in a corner saying why we should all never have fun and hate our choices, and by virtue of them, ourselves.

Some have decried the large cholesterol content, while others question the sanitary sanity of the boards.

“I wish they’d just go away. The idea of smearing something on a wood board with other food, sharing that with other people and having them all dip into it. It’s a bacteria heaven," said Laura Cipullo, a registered dietitian in New York City.

Even OG butter boarder Doiron has weighed in on criticism of smushing a slab of bread into a buttered plank of wood.

“I prefer a knife. The big mistake in my video was swiping it because I only had 28 seconds. But I think just like a charcuterie board, serve it with a knife, let people serve themselves. But it’s really up to personal preference,” she said.

While some professors have pointed out that the boards can be unhygienic, our editorial opinion is just to properly clean them. Also, don’t have friends that don’t wash their hands after going to the loo. It’s gross and you don’t need those kinds of people in your life.

Frankly, Doiron, don’t let the nerds get you down. Smush away, Queen.

Do we have enough butter?

Well, before you get too excited about churning out any number of butter boards, there’s the potential for a butter shortage this winter.

Is nothing sacred anymore?

The dairy industry is facing labour shortages in the US, and prices are expected to rise. And the price of milk in general is also rising across Europe, which butter is susceptible to just as cheese is.

Because cheese is more of a luxury product with more labour required to create it, butter should still remain the cheaper option, for those wanting a charcuterie board with a twist.

Would you eat the giant legs of this luxury Vietnamese dragon chicken?