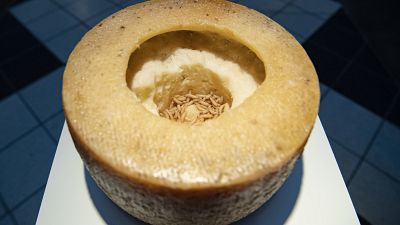 Picture this. You’re on a beautiful holiday in the hills of Sardinia. There’s a cool breeze that tempers the Mediterranean sun beating down on you.

At the local farmhouse, a charming man offers you some of his local, authentic Sardinian cheese. You take a bite. It’s a strong hard cheese with a nutty aroma.

Whatever your reaction to the maggot cheese, the dairy farmer is nonplussed. Because he’s just given you a slice of Sardinian delicacy Casu Marzu.

Sardinia’s notorious live maggot cheese recently made waves on TikTok when travel influencer Amilotta was hospitalised after trying a piece.

@amilotta Do yourself a favor and don’t google it. #italy#sardegna#food♬ original sound - 900k 🕷

Casu Marzu (literally, "rotten cheese") is a controversial cheese. It was outlawed by the EU due to regulations over the consumption of foods infested with parasites.

Guinness World Records even awarded it the “World’s Most Dangerous Cheese” as “the maggots, once consumed, can survive stomach acid to pass through the intestine walls, causing vomiting, abdominal pain and bloody diarrhoea.”

Sellers could face fines up to €50,000 if caught with Casu Marzu among their delicacies.

So you’re not going to find it stocked on shelves in Sardinian shops, if you fancy trying the funky fromage.

Sardinian travel blogger and holiday planner Claudia Tavani has only come across a handful of tourists willing to try the cheese. The first was a traveller from Israel.

“I kept telling him this and it's not even kosher,” she told Euronews Culture. But he insisted.

“We were in Alghero. We went to a market and we had to go above and beyond to find it. It was word of mouth until we managed to find a shepherd that was selling his cheese.”

“It's not something that they can legally sell. So it was off-the-record hidden. And he tried a little bit,” she says.

What possible benefit can there be to having your cheese infested with live maggots?

The cheese is produced by allowing Sardinian wheels of Pecorino to get infested as cheese skipper flies lay their eggs in its cracks.

When the eggs hatch into maggots, the larvae start to eat and digest the cheese they’re surrounded by. The effect of digestion breaks down the hard cheese and turns it into a supposedly creamy delight.

The practice of making Casu Marzu has been around since the Ancient Romans, suggests Giovanni Fancello, a Sardinian food writer.

“When a wheel turned, people only had to taste the result to know it didn’t need throwing away,” he says of the inevitable discovery of the maggoty delicacy.

In September, Sardinians celebrate Cabidanni - the new agricultural year. It’s a preserve from the Ancient Greek and Jewish calendars. Ever since, the opening of a Casu Marzu wheel to recognise the end of the summer and beginning of a new year has become a Sardinian tradition.

“It is eaten as soon as it forms in late summer and until the stock is finished in the Fall,” Fancello told Euronews Culture. “There is rarely any preserved. When it is finished, there is no more.”

A reminder of simpler times

While it has been officially declared dangerous, traditional Sardinians only caution potential eaters if the maggots are dead.

“The transformation into Casu Marzu occurs naturally. The fly chooses a wheel that is already compromised,” Fancello explains. The theory pertains that on days when the Sirocco wind - a hot gust coming up from the Sahara - blows through to Sardinia, that’s when the best Casu Marzu is formed.

Fancello is a big Casu Marzu fan and eating it always takes him back to simpler times.

“Contemporaries appreciate it less but it used to be a precious commodity. I always used to eat it with gusto besides my shepherd father. It has a spicy flavour that has digestive properties. Eaten after a hearty meal it digests right away,” he says.

Despite the ban removing it from stores, Fancello finds he can access it still through local farmers. “Although banned, it is still found. But the demand is not that much.”

“Good things are either always banned or fattening,” he says.

If you miss the Casu Marzu season, you may be in time for the yearly lamb roast at Easter. Traditional shepherd families still slaughter a lamb once a year and roast it on a spit for a feast.

The willingness to get your hands dirty isn’t for the faint-hearted though, says Tavani.

“When they chop the lamb up in the kitchen, the noise makes me sick,” she admits. “But my mum would save the head.”

With the head meant to be the tastiest part of the lamb, Tavani’s mum enjoys the Easter lamb as any good Sardinian should. Tavani, who doesn’t dare try Casu Marzu, gives her mum a wide berth for this special treat.

Count Ugolino della Gherardesca was an Italian nobleman accused of treason. Tavani’s family nickname comes from Dante’s_ '_Inferno', where Conte Ugolino is mentioned gnawing on the skull of an archbishop:

“I saw two shades frozen in a single hole

packed so close, one head hooded the other one;

the way the starving devour their bread, the soul

above had clenched the other with his teeth

where the brain meets the nape.”