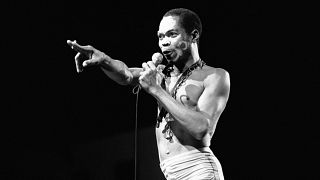 A new immersive exhibition opening at the Paris Philharmonic is celebrating the legacy and life of Fela Kuti, the Nigerian music legend regarded as the pioneer of Afrobeat.

The concert hall and exhibition complex is paying homage to the late musician by recreating the atmosphere of his sweaty, politically-charged nightclub, The Shrine, in Nigeria's commercial capital, Lagos; that became a beacon for global stars in the 1970s, including Stevie Wonder and Paul McCartney.

Co-curator of the exhibition Alexandre Girard-Muscagorry, said that the show aims to "unfold the entire musical and political trajectory using archives and unpublished photographs", allowing visitors to get "as close as possible to Fela's music and his political struggles."

Kuti - a trumpeter, saxophonist, singer, pianist and composer - left an enormous legacy on the world of music, influencing generations of artists, from Paul McCartney and Miles Davis, to Burna Boy and Kendrick Lamar.

He created something entirely new with his music, fusing American blues, free-jazz, soul, funk and traditional Western African styles like Yoruba to create the fundamentals of Afrobeat (not to be confused with 'Afrobeats').

While Kuti died from complications related to AIDS in 1997, his albums 'The ’69 Los Angeles Sessions' (1970), 'Expensive Shit' (1975) and. 'Zombie' (1977) remain extremely popular to this day, and many of his tracks have even been sampled by mega stars, including Beyonce, J. Cole and Nas.

"Fela's music is everywhere in the world", explains Girard-Muscagorry.

"There are obviously many Afrobeat groups that continue to revive Fela's music in Nigeria, but also in Europe, Brazil and Japan," he added.

The sound of Afrobeat has been also carried forward by two of his sons, Femi and Seun.

Femi Kuti and his son (Fela's grandson) were recently nominated for this year's Grammy's for their double album "Legacy +", in the Global Music category.

In 2018, Seun Kuti also received a Grammy nod, in the World Music Category for his album 'Black Times'.

"The voice of the voiceless"

Aside from his contribution to music, Kuti was heavily involved in political activism in Africa from the 1970s and used his musical talent as a tool for political resistance.

Ahead of the opening of the Paris Philharmonic exhibition, 60-year-old Femi Kuti spoke about his father's bravery in using "music as a weapon."

"Instead of picking up a gun, music was the only tool he had. It was a weapon to use against authority, against colonisation and corrupt African governments," said Femi Kuti.

The Afrobeat pioneer was harassed throughout much of his life by the military authorities in Nigeria for his relentless criticism of their corruption and violent misrule.

There was a particularly vicious reaction after he refused to take part in an official music festival in 1977, instead organising a parallel event that became much more popular and attracted international stars including US soul singer Stevie Wonder.

Soldiers responded to his counter-festival by burning down his home and pushing his mother out of a first-floor window, causing injuries which led to her death a year later.

"He was a voice for the voiceless, the only opponent who was brave enough to tackle the hardcore military dictators at that time and he paid a very high price," said Femi Kuti.

The retrospective Fela Kuti exhibition runs from 20 October to 11 June 2023 at the Paris Philharmonic.

What role did the sound of music play at the Qatar World Cup?