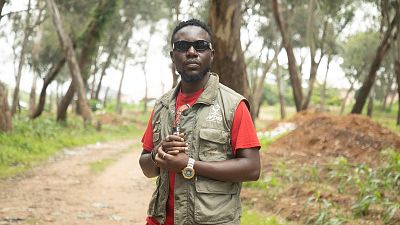 Dennis Jonathan Dalyop has become accustomed to pushing boundaries and achieving the impossible. From an early age, he has suffered from Keratoconus, an eye condition that causes impaired vision and blindness. Despite only being able to see blurred lights and colours, Dennis is pursuing a career as a film director.

"It all started when I was two years old. The doctors could not detect what was wrong with me. We tried so many hospitals, but they told us there was nothing they could do about it. There's no drugs or no glasses that can correct it," recalls Dennis.

According to the National Library of Medicine in Washington USA, over four million adults below the age of 40 have moderate to severe visual impairment or blindness in Nigeria. Dennis grew up in the poorer northern area of the country, where blindness is more prevalent.

"It's been trouble growing up with this issue. Some people in society look at you like someone that they should pity. There are times when I stumble over something, and people shout at me," says Dennis. "There are times when people do things intentionally to see how I will react. I faced a lot of challenges in life, but I didn't allow that to limit me," he adds.

'I feel I can lead them to victory'

His interest in filmmaking was born out of a love for acting and performing. Dennis had limited directing experience initially, but he had a burning desire to lead. "I came to realise that there is something in me that wants a job to be done properly. I want to lead these people, and I feel I can lead them to victory," Dennis tells Scenes.

Film directing is a visual craft that usually requires a director to be able to see clearly. To see, Dennis uses his senses of hearing, smell, and touch.

"My sense of hearing is my strongest weapon. When you move, I hear your steps, and I count how many steps you have made. If you are one hundred metres away from me, I get your smell when the wind blows, and I can tell how far you are from me. I mark points with tape, and when you cross it, I feel it," Dennis tells Scenes.

'A leap of faith'

Dennis works closely with his team throughout the production process. He gives them detailed descriptions when casting actors, and they help him select the appropriate actor. Austin Manu is an actor Dennis has directed in the past.

"My first reaction was, is this a joke? How can a visually impaired person direct? But when I saw a lot of things he was doing, I was surprised by the kind of directing skills he had," explains Austin.

"It's quite difficult for you to allow a blind pilot to take you to where you're going. But I took a leap of faith and allowed the pilot to fly the plane, and I was not disappointed," he adds.

Dennis makes films that are known for their drama and suspense. Peers have praised his unique visual style and creative storylines.

'Dennis is somebody I can trust'

"Dennis is a phenomenal filmmaker. He has outgrown his level of disability and uses it to his advantage. I've been disappointed a lot of times in filmmaking. Directors have disappointed me. I saw Dennis as somebody I could trust. The directorial concept of this guy is second to none," says Austin.

"I'm not a motivational speaker, but I believe you need to accept who you are to make life work for you. When you see me on the street, and at home, you will swear that this guy is fine. Why? Because I choose to live rather than just to exist," says Dennis.

In the future, Dennis plans to start his own production company. He hopes that living a positive life will inspire other blind people along the way.