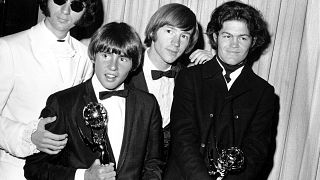 Micky Dolenz, the last surviving member of the 1960s American pop-rock band The Monkees is suing the FBI to find out why the agency had a file on them.

In 2011, the Federal Bureau of Investigation released a heavily redacted dossier which commented on a 1967 concert of the band and reported “anti-US messages on the war in Vietnam”.

Dolenz now wants to know exactly what was omitted and how much information was gathered about him and the other band members.

If you were born after the band’s heyday in the mid-to-late-1960s, you might not know just how big the band was in the four years of their existence before they split. Originally formed for a TV show, they were widely considered to be America's response to the Beatles and went on to have four no.1 albums in 1967, a record that’s still unmatched.

One of their biggest hits, “I’m a Believer”, was resurfaced and reached new chart success worldwide thanks to its inclusion on the soundtrack to the 2001 animated film Shrek.

In the years the band was active, the band also talked about the war in Vietnam in critical terms, releasing songs like “Last Train to Clarksville” in 1966 - a story about an army man who’s headed to war and fears he won’t return home to his lover.

But it’s unclear what anti-US messaging the FBI found in the Monkees’ concert of 1967, as most of the text of the file released in 2011 - - which mistakenly calls the band “The Monkeys” in the file name - - is blacked out.

“During the concert, subliminal messages were depicted on the screen which, in the opinion of [informant’s name redacted], constituted ‘left-wing intervention of a political nature,'” reads the FBI file. “These messages and pictures were flashed of riots, in Berkley, anti-U.S. messages on the war in Vietnam, racial riots in Selma, Alabama, and similar messages which had unfavourable response[s] from the audience.”

Dolenz, now 77, is the last surviving member of the 4-man band. While it's unclear why he decided to sue the FBI ten years after the agency's file on the band was first released, his lawyer Mark Zaid told Rolling Stone magazine that "it might be fun to see if the FBI had a file on him or his former bandmates”.

In June, Zaid submitted a standard freedom of information request to access the FBI file, but pressed on with a lawsuit after this was turned down.

The Monkees were hardly an overtly political band, especially compared to other musicians who in those years were actively part of the anti-war movement, like Joan Baez, Judy Collins and Phil Ochs. Other major singers and bands who released anti-Vietnam war songs in those years, included Marvin Gaye, The Doors, John Lennon, Joni Mitchell and Bob Dylan.

"When people talk about protest music against the war in the 1960s, they don't necessarily immediately think about the Monkees," Dr Fabian Hilfrich, professor of American History at the University of Edinburgh, UK, told Euronews Culture.

"The Monkees wrote or performed one song called “The Last Train to Clarksville”, which was an anti-war song, but it's a very subtle one. It is about a soldier who wants to see his girlfriend one last time before he ships out, but we don't even really find out that he's a soldier - just one of the last lines of the song is, 'I don't know if I will come back,' so that implies that he's a soldier. But again, it seems like the Monkees were very careful not to be too overt with anti-war criticism."

Their combined popularity might explain why J Edgar Hoover's FBI set its sights on them as it was chiefly concerned with rooting out political dissenters and many artists and activists deemed to be supporters of communism or people otherwise engaged in anti-American acts.

"I'm sure if they kept an eye on the Monkees, then they definitely kept an eye on much more," said Hilfrich, mentioning the likes of Dylan, Neil Young, Crosby, Stills and Nash, Jimi Hendrix, The Temptations and Creedence Clearwater Revival.

"And if it was really, as we think, motivated by some FBI agent who may actually have been at a Monkees' concert, probably the one in Hollywood Bowl in June 1967, and he saw there that they performed a song 'I Want to Be Free' and they flashed in the background images of anti-war demonstrations, civil rights demonstrations -- basically the ferment of the 1960s --, then we can definitely be sure that all the others that I mentioned --Bob Dylan undoubtedly-- have an FBI file," he added.

"There will be many and many of these bands and musicians there. There is no doubt about that."

Peter Tork of the Monkees dies at 77