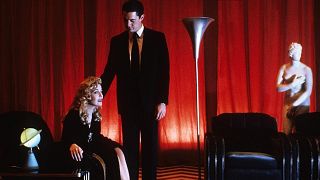 And what a journey this film has had: from hated misstep to reappraised cult classic, it’s hard to think of a film that’s enjoyed such reappraisal.

When the TV show Twin Peaks debuted on 8 April 1990, it was an instant hit that created a phenomenon unlike any before it, changing the medium of television and paving the way for future TV shows in the long road towards what some have referred to as the golden age of long-form series.

Fans obsessed over the surreal and soapy serial drama from Mark Frost and David Lynch, and theories were cooked up during watercooler chats, all trying to solve the question on everyone’s lips: “Who killed Laura Palmer?”

Bafflingly, only 14 months after the show started, television network ABC pulled the plug.

But Lynch wasn’t finished with the town of Twin Peaks.

Twin Peaks: Fire Walk With Me premiered in Cannes only a year after the show went off air, and it did not fare well with critics.

Even the then-hottest name in moviemaking, Quentin Tarantino, stated during the festival that Lynch had “disappeared so far up his own ass” that he (Tarantino) had “no desire to see another Lynch movie again.”

...Said the self-obsessed filmmaker who needs a stern and diligent editor more than Dale Cooper needs a slice of cherry pie...

The expectations for the film were high, but Lynch didn’t care. Instead of offering a payoff to the series’ mind-melting finale cliffhanger, he gave audiences something they were not expecting: a prequel. A far more horrific prequel at that.

At the time, prequel stories weren’t the mainstay they are today, and audiences were befuddled by how Lynch could leave them hanging with regards to the fate of their favourite FBI agent. More than that, they questioned why the filmmaker instead choose to drastically – and granted, somewhat jarringly – change storytelling structures to a more staccato rhythm and alter the tone to chronicle the last week of Laura Palmer’s life.

The character (played by Sheryl Lee, giving a virtuoso performance) was always the show’s narrative lynchpin. She was a talismanic presence that represented the semblance of perfect small-town Americana. And, like in all Lynch films, underneath the white picket fence lies a darker, seedier underbelly; the fallen prom queen was not the squeaky clean symbol of wholesomeness the community of Twin Peaks wanted her to be.

Despite being the central figure, audiences never had her point of view, as she is found in the first episode on the shores, dead, wrapped in plastic. Twin Peaks: Fire Walk With Me finally got to explore the intimate complexities of her side of the story. Instead of focusing on the Beautiful Dead Girl figure, like so many true crime shows tend to do, Twin Peaks: Fire Walk With Me chose not to forget the person at the center of acts of violence.

The complexities of trauma

Over the years, the film has undergone reassessment. More than that, this misunderstood classic has found such redemption that many Lynch fans list it as their favourite in his filmography.

And rightly so. There’s something uniquely bold about Lynch's approach, which could be seen from the first frames of Twin Peaks: Fire Walk With Me: the film opens with a bat destroying a television set, setting loose a world previously confined to its medium and allowing it to grow wings – to the soundtrack of the piercing screams of a murder (or potentially the howls of angry fans).

Unlike so many shows these days which see studios unadventurously churn out expensive prequels offering more of the same, sticking slavishly to the “if it ain’t broke, don’t fix it” motto to cynically appeal to mainstream audiences, Lynch did the opposite. He broke the TV set, delivering something challenging and borderline inaccessible on first watch.

This was a film that dared to shift its tone: out with the humour and quirkiness, and in with instances of sex and violence that couldn’t be brought to network television.

And while many criticized Lynch for his depiction of violence and the objectification of women, it all served to buttress one of the film’s key themes.

The show touched upon the fact that the evil entity within Twin Peaks was “the evil that men do”; Twin Peaks: Fire Walk With Me feels like a treaty on grief and evil, specifically patriarchal violence against women. There is no moralizing at play. Nor could Twin Peaks: Fire Walk With Me be argued to be a feminist film. However, through retelling Laura’s story, Lynch created a heartbreaking tableau that is not violent for violence’s sake but about a victim that gains agency. We finally learn that Laura refuses to be taken over by evil completely and even through death, she achieves salvation.

The film then becomes an exploration on the rotten foundations of America's patriarchal values. Lynch even visually embodies the concept of pain and sorrow of the human soul - what he calls “Garmonbozia” - through the all-American staple of creamed corn. And by focusing so predominantly on the architype of the blond damsel / Beautiful Dead Girl trope, Lynch undermines a certain iconography to better comment on it.

It becomes even more apparent when watching the film today how ahead of its time it was.

Nowadays, especially in a post #MeToo landscape, audiences are more aware of the effects of trauma. Culture in general is more openly grappling with difficult topics of abuse and survival. Twin Peaks: Fire Walk With Me addressed topics of rape, guilt and incest with brutal efficiency at a time when mainstream audiences weren’t ready for it. It's a portrait of trauma that destabilizes rather than offers any hand-holding or easy answers. Trauma isn’t simple, and neither are David Lynch films.

So, while many will rush to watch play-it-safe prequels that tread old ground like House of the Dragon or The Lord of the Rings: The Rings of Power, choose to discover, reappraise or let Twin Peaks: Fire Walk With Me crawl under your skin once more.

Even 30 years later, we could do with more daring approaches.

Cult director Just Jaeckin dies: what was the 'Emmanuelle' phenomenon?