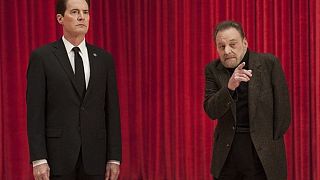 The town of Twin Peaks is in mourning.

Al Strobel, best known for his role as the enigmatic Phillip Gerard aka: the one-armed man in the 'Twin Peaks' drama series, has died at the age of 83.

Strobel’s death was announced on Facebook by producer and longtime David Lynch collaborator Sabrina Sutherland, who wrote: “I am sad to have to post that Al Strobel passed away last night. I loved him dearly.”

The groundbreaking and hugely influential series originally premiered in 1990, and ran for two seasons spanning 30 episodes. The show came back in 2017 to great acclaim.

Strobel was an amputee in real life, having lost his left arm in a car accident when he was 17. He was a mainstay in all eras of 'Twin Peaks'. His character cut off his own arm to stop an evil entity – Bob – from possessing him, and is responsible for uttering the show’s haunting signature poem:

Beyond Twin Peaks, Strobel also appeared in the films Megaville, Ricochet River, and the TV film Child of Darkness, Child of Light.

Mark Frost, the series’ co-creator alongside David Lynch, was one of the first to pay tribute to Strobel: “Oh no…Dear Al…as those of you lucky enough to have met him over the years, what a warm and wonderful gentleman he was. RIP, friend.”

No cause of death was provided, nor were any other details offered.

Euronews Culture's Film of the Week: 'Twin Peaks: Fire Walk With Me'