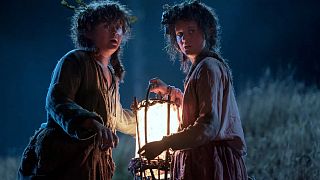 The wait for Tolkien’s fans has been long, but with “The Lord of the Rings: The Rings of Power” we are finally back to Middle Earth.

It’s been 19 years since “The Return of the King” wrapped up Peter Jackson’s trilogy in 2003, a series so beloved by both hard-core Tolkien's fans and those who were absolute newbies to the British writer’s epic world two decades ago, that it can be considered quite bold for Amazon Prime to dare put itself up for comparison.

But the new series, whose first two episodes -- directed by J.A. Bayona -- are now available on Prime, live up to J. R. R. Tolkien’s fantasy novels as well as to the unavoidable comparison with Jackson’s films.

The series is made for the big screen, with beautiful shots of spectacular landscapes filling almost every scene, a splendour that is increasingly being brought to streaming platforms (the final two episodes of the last season of Stranger Things, for example, could easily be screened in a cinema.)

The first episode starts with a brief lull, where we see the elf Galadriel -- a character that’s familiar to those who have watched the Lord of the Rings -- as a child sailing an enchanted paper ship in the mythical land of Valinor.

But the mystic peace of the elves’ lands doesn’t last long, and we’re immediately thrown into action: a bloody, century-long war brings havoc on Middle Earth and Valinor until the dark lord Morgoth is finally overthrown. But even as calm seems to return, a profoundly scarred Galadriel -- now commander of the northern armies, the Warrior of the Wastelands -- keeps chasing for the evil lurking in the shadows, Morgoth’s lieutenant Sauron.

Swedish-born Welsh actor Morfyyd Clark is astounding in her performance of a strong, defiant, rebellious and fierce Galadriel who also carries within herself the trauma of loss and grievance and the experience of a brutal conflict.

While the Lord of the Ring trilogy gave us plenty of great female characters, none of them was quite allowed to spring into action as Galadriel does in the Rings of Power, where there’s no doubt she takes centre stage.

Clark, who you may have seen in the chilling and fascinating A24 2019 Welsh horror film "Saint Maud", captures that ethereal, elusive essence of all elves while making Galadriel very ‘human’, in a way, with all of her expressions.

But The Rings of Power isn’t a film about elves only: we have the harfoots, tiny joyous people that are predecessors of the hobbits, orcs, dwarves and humans. And each one of the characters presented on screen has their own well-written story to make us care for them.

As the show is being released at the same time as House of the Dragon, the Targaryen-focused prequel to Game of Thrones, it’s impossible not to compare the two shows. While House of the Dragon has its merits, even one single shot of Rings of Power would clearly show that a lot more effort went into the production of the Lord of the Rings’ prequel.

Give the people what they want! Or what they need?

The show was funded by Amazon’s Jeff Bezos - the richest man in the world - and it shows. Some $465 million -- $250 million for the rights to the series alone -- went into the making of only eight episodes of the series, making it the most expensive in history. But the results are well worth the cost, with the show featuring staggering cinematography, photography, costumes and state-of-the-art special effects.

More than House of the Dragon, the Rings of Power manages to recreate an entire world - universe, if you like - of epic proportions that feels realistic and lived-in.

But both shows have a fundamental flaw, if it can be called a flaw: they both fall into the trap of giving us what we already know and love, instead of bringing something truly original to the table. The intrigues and betrayals of House of the Dragon are the ones that we’ve learnt to expect from Game of Thrones, and the poetic, grandiose landscapes and battles between good and evil of Rings of Power are the same we loved in Lord of the Rings.

It is not necessarily a fault to stay loyal to the original franchise, quite the opposite. Money will go where streaming companies expect to get big audiences, and we’re happy to watch content we are familiar with and we already know and love. But if the big funds are spent on prequels and sequels, less money will be spent on truly original, innovative content.

So, is it worth watching Rings of Power? Our answer is yes, not only for the quality of the production but also because we’re enjoying the format in which the show is being released - drip-feeding episodes, just like House of the Dragon.

Ahh... takes me back to a time when all shows were weekly. Drip-feeding episodes revert back to the tradition of TV as it used to be before streaming while allowing streaming platforms to keep audiences hooked on a subscription rather than having them dip in and out for specific shows.

But it’s also good, somehow, for viewers. There’s no binge-watching when you have to wait patiently for the show to be broadcast. Every new episode released then becomes an event, an occasion to order pizza and sit around the screen with friends or family, discussing the show. And we hope there’ll be a lot more to discuss in the future.

What are the racial controversies about 'The Rings of Power'?

Streaming site is reportedly a victim of "review-bombing"