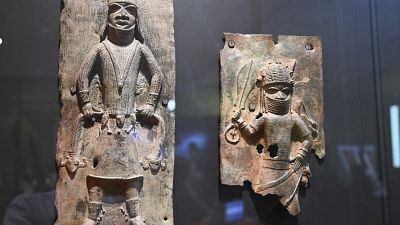 Nigerians have rejoiced that they will soon be welcoming ancestral treasures looted during the colonial period back to their home.

The Benin Bronzes were taken from the West African Kingdom of Benin in the 19th century but it was announced by the Horniman museum in London that they would be returned earlier this month.

They will soon be rehoused in the Benin National Museum, and are among 72 artefacts that will be returned.

The decision comes after Nigeria's National Commission for Museums and Monuments formally asked for them to be returned earlier this year.

"The ancestors are returning, so with baited breath, everybody is waiting and hoping to behold these objects," says Theophilus Umogbai, Director and curator of Benin City National Museum.

"People have been talking about these objects since 1897 and yet we are unable to access these objects to behold them, to view them," he adds.

What are the Benin Bronzes?

‘Benin Bronzes’ is a catch-all term for artefacts removed from the Kingdom of Benin, which is now part of Nigeria. It is applied to items made from ivory, coral, wood and other materials as well as metal sculptures.

The artefacts are more than just decorative objects, according to Umogbai.

The objects returned from the Horniman represent a fraction of the 3,000 to 5,000 artefacts stolen from the Kingdom of Benin in 1897. During this period British soldiers attacked and occupied the capital Benin City as part of an operation to expand British political and commercial influence in West Africa.

The British Museum alone holds more than 900 objects from Benin, and the National Museum of Scotland has another 74.

Others were distributed to museums around the world.

“So, they are part of our history and when they were taken away it was our civil library was raided and vandalised, their return now will help to fill in those gaps," says Umogbai.

The artefacts include plaques, animal and human figures, and items of royal regalia made from brass and bronze by artists working for the royal court of Benin.

Why are the Benin Bronzes important?

The return of some of the Benin Bronzes is part of a wider move to repatriate items which were stolen by colonialists to their native lands.

The move comes amid a global reassessment of colonialism and its effects on local populations.

For bronze casters, who learned their skills from their forefathers, it's very important to see the objects made by their ancestors back in their land.

"It is our heritage, we have not seen those bronzes, they were made by our forefathers. That bronze is heritage, it means that it is very, very important, if they can bring that bronze, we will be very happy," says bronze caster Osapowa Ewen.

Some European states are coming around to the move to repatriate items from their museums, with Germany signing a deal with Nigeria to return a hundred of the Benin Bronzes and French President Emmanuel Macron signing over 26 artworks of the 19th-century Dahomey Kingdom, present-day Benin, just west of Nigeria.

Meanwhile after a lengthy legal battle earlier this year antiquities were returned to Iran.

Despite the move from the Horniman, British institutions have been slower to respond.

Nigeria's Federal Ministry of Information and Culture formally asked the British Museum to return its Benin Bronzes in October of last year.

The museum said that it is working with a number of partners in Nigeria and it is committed to a "thorough and open investigation" of the history of the Benin artefacts and the looting of Benin City.

Elation on the streets of Benin as France returns stolen bronzes