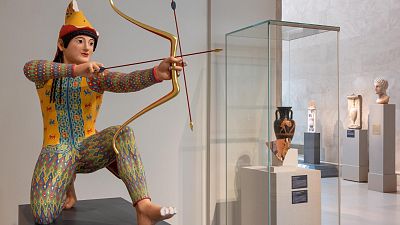 The pristine white marble of Greek and Roman statues wasn't always such a blank canvas.

To highlight their colourful past, two historians are reconstructing ancient statues to convey just how vivid they once were.

The stunning results are now on show at the Metropolitan Museum of Art in New York (The Met), offering a vibrant insight into the bright world of ancient Greece.

The historian couple behind the exhibition

The Met exhibition is the result of the brilliant work of historian husband and wife duo, Vinzenz Brinkmann and Ulrike Koch-Brinkmann. The pair study polychromy, the art of painting in multiple colours, on ancient items.

The couple explain that when the statues were first unearthed, they weren’t the plain white tone we see now.

Edward Robinson was the director of the Met for 21 years between 1910 and 1931. He was also an archaeologist who was present when many Ancient Greek statues were discovered.

“He saw the colourful sculptures come from the earth,” archaeologist Koch-Brinkmann explains. “He also saw, a few days after they were excavated, the sculptures lost their colours.”

As the statues had been protected from nature, the colour hadn’t eroded away. But after just a short period of air exposure, the thin layer of colour wore away to reveal the plain base marble.

Luckily for the restorers, there are still some clues of their former glory remaining.

In the Met, the colourful reconstructions stand right beside their originals. If you look closely at the original statue of the Sphinx, you will notice it is not exclusively white.

The blemishes are clues to the original colour scheme.

Using modified light conditions, Brinkmann and Koch-Brinkmann were able to look closer at the imprint the worn away colours had left. They took photographs in daylight, using ultraviolet light, with infrared cameras, and also using microscopes.

Using non-invasive x-ray methods, the statues were analysed for traces of chemicals that would correspond to different pigments the ancient Greeks or Romans would have used.

This helped the pair to recreate the treasured statues of the Met, and complete an approximation of their original colours.

Where to see it

“This innovative exhibition will activate The Met’s displays of ancient Greek and Roman art like never before, by displaying colourful reconstructions of ancient sculptures throughout the galleries,” says Max Hollein, director of The Met.

“It is truly an exhibition that brings history to life through rigorous research and scientific investigation, and presents new information about works that have long been in The Met collection,” he added.

The collection on show ranges from Cycladic idols of the third millennium BC to Imperial Roman portraiture of the second century, with 14 reconstructions next to their monochrome originals.

For those wanting to take a futuristic step back into the past, there’s also an augmented reality (AR) exhibition, ‘Chroma AR’. Using a smartphone, visitors can view the Sphinx in its original colours and discover even more about the history of colourful relics.

Chroma: Ancient Sculpture in Colour will run at the Met until 26 March, 2023.