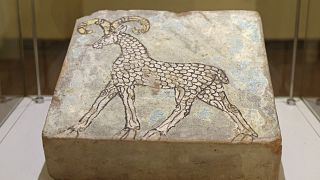 The artefacts have been in a Swiss bank for decades but are now back in Tehran after a legal battle   -   Copyright  Atta Kenare/AFP
By Tim Gallagher  with AFP  •  Updated: 19/04/2022

After a 40-year journey, a collection of ancient artefacts has been returned to the National Museum of Iran, closing the latest chapter in the era of cultural restitution.

The 51 glazed bricks, which were made in the ancient Manan kingdom between the 10th - 7th century BCE, have been languishing in a Swiss vault for decades.

The bricks were first discovered after the 1979 revolution when a farmer named Mirza Ali recognised them as the temple artefacts from the village of Qalaichi, near the Kurdish town of Boukan.

"Immediately, people started looting and selling glazed bricks, taking advantage of the lack of government control," says archaeologist Youssef Hassanzadeh, the organiser of the exhibition where the bricks are on display.

During the Iran-Iraq war in 1985 a group of heavily protected archaeologists were sent to the site by the authorities. As they commenced their dig they realised it was too late and the treasures had been smuggled overseas by unscrupulous treasure hunters.

During this time several Iranian bricks entered private collections and museums around the world, and the site was closed for 14 years.

The bricks themselves are decorated with colourful anthropomorphic animals such as lions and winged cows. These figures are accompanied by mythological figures.

"Masters of the art of glaze, the Manneans, who practised a polytheistic religion, decorated the facade of their temples in this way", according to Hassanzadeh.

In 1991 the British Museum learned that an Iranian family was hawking a set of the glazed bricks in the port of Chiasso, on the Italian-Swiss border, and curator of Middle Eastern collections John Curtis was dispatched to negotiate a possible purchase of the antiquities.

As an expert of the Assyrian and Iranian world, he immediately recognised that the collection belonged to the site of Boukan and advised the British Museum and other European museums not to buy them. The unique nature of the collection meant that it mustn't be divided and should be returned to its country of origin.

The Iranian owner of the collection was not prepared to return the treasure to his home country, and so they remained in a safe deposit in a Swiss bank, where almost two decades later they were seized by Swiss police.

Refunds are not always so complicated. In an adjoining room, the museum exhibits 29 pieces from the Bronze Age to the Islamic period.

“Last year, a descendant of Henri Goblot approached the Iranian cultural adviser in Paris and informed him that he had a collection of Iranian antiquities,” says Nokandeh.

"We don't know the details and we don't know in which areas he searched, how he collected them and under what conditions he kept them," he adds.

Engineer and Iranologist Goblot lived in Iran during the Second World War where he was the representative of the Free French government under General de Gaulle.

"He had probably visited Iranian archaeological sites and collected objects to transport them to France,” says Nokandeh.

But the quest is not over in this country which is more than 5,000 years old and which conceals a wealth of ancient objects, and talks are ongoing with the US and Australia.

Nor is the restitution of antiquities confined to the Middle East.