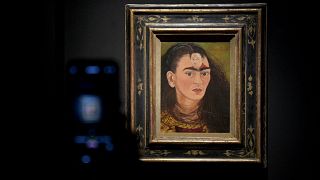 Frida Kahlo's 'Diego y Yo' during the pre-opening for the press of the MALBA exhibition   -   Copyright  JUAN MABROMATA/AFP or licensors
By Jonny Walfisz  with AFP  •  Updated: 25/08/2022

A Frida Kahlo self-portrait, that sold for a record amount, is going on display for the first time in 25 years.

The work ‘Diego y yo’ (Diego and I), will be shown at a Buenos Aires museum, nearly a year after it went up for auction.

In 2021, ‘Diego y yo’ went for €30.8 million at a Sotheby’s auction in New York. It was bought by Eduardo F. Costantini, a renowned Argentinian collector committed to supporting Latin American art and founder of the Museum of Latin American Art (MALBA) in Buenos Aires.

At over €30 million, it is the most valuable Latin American portrait of all time. The sale was for triple the next highest Kahlo piece and at €5 million more than the highest prior estimates.

The previous record for a Latin American artist had been set by Kahlo’s husband, Diego Rivera, with his 1931 painting ‘Los Rivales’, which sold for €9.76 million at auction in 2018.

Frida Kahlo's prior record was created in 2016 when ‘Two Nudes in the Forest’ sold for €6.8 million, also in New York.

Diego y yo will be displayed as the main attraction of the ‘Tercer Ojo’ (Third Eye) exhibition where Eduardo Costantini will present his private collection at MALBA.

Other artists' works on show in the exhibition are from the Cuban Wifredo Lam, the Mexicans Miguel Covarrubias and Rosa Rolanda, the Brazilian Vicente do Rego Monteiro.

The Malba exhibition features more than 240 works, many of which have not been seen in public for nearly 30 years. The last time Diego y yo was on public exhibition was in 1998.

But why is Diego y yo such a valuable and important painting?

For starters, it was the last self-portrait Kahlo completed before her death in 1954.

Finished in 1949, the painting features tears in her eyes and her husband, Diego Rivera, covering part of her head.

The tears in Kahlo’s eyes are thought to represent her emotions over Rivera’s closeness to Mexican actress María Félix at the time.

“For me, Frida is a unique artist. She has a dramatic life that she tells without shame, in a spontaneous and open way. I think that's precisely what people like about her,” Eduardo Costantini.

Two of Mexico’s most esteemed artists; they were known for their rocky relationship. The two wed in 1929. They divorced in 1940 but reconciled and remarried the same year.

While Rivera was known for his murals, Kahlo’s work often unflinchingly looked at her private life, giving insight into the relationship of two of Mexico’s most important artists.