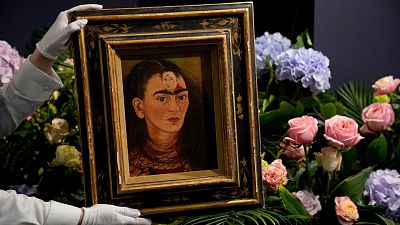 A self-portrait by Mexican artist Frida Kahlo has gone under the hammer for €30.8 million – making it the most valuable Latin American portrait of all time.

Its sale more than triples the record for any Kahlo painting and is €5 million more than the highest estimates given prior to the winning bid.

The auction took place at Sotheby's, New York, on November 16.

'Diego y yo', or 'Diego and I', was the last self-portrait Kahlo completed before her death in 1954.

Finished in 1949, the painting features tears in her eyes and her husband, artist Diego Rivera, covering part of her head.

The work was purchased by the Eduardo F. Costantini Collection, a renowned Argentinian collector committed to supporting Latin American art and founder of the Museum of Latin American Art (MALBA) in Buenos Aires, Sotheby's confirmed.

#AuctionUpdate: Frida Kahlo’s 'Diego y yo (Diego and I)' was acquired by the Eduardo F. Costantini Collection, a renowned collector with a longstanding commitment to supporting Latin American art and artists, and founder of Malba, Museo de Arte Latinoamericano de Buenos Aires. pic.twitter.com/Us3sZNZZhN

Kahlo's paintings are rarely up for public purchase

'Diego y yo' last went up for auction more than 30 years ago. Its previous seller was anonymous and not based in Mexico – the artists' home country.

Kahlo painted herself many times throughout her career, but the fact this was her last portrait increases its value enormously. The overall price included €3.4 million in fees, Sotheby's said.

"The reason why this is such an event is that Frida Kahlo paintings come to auction so incredibly seldomly. It marks an incredibly rare opportunity to acquire work by Frida," he says.

Demand for Kahlo's work has soared in the 21st century, with her likeness used on a plethora of products in fashion and art, much to the dismay of art historians.

Stock agrees with this sentiment, saying that many groups have "co-opted Frida Kahlo's life for their own ends".

Frida Kahlo's prior record was created in 2016 when Two Nudes in the Forest sold for €6.8 million, also in New York.

When Kahlo painted this in 1949, rumours were circulating that her husband was having an affair with her good friend Maria Felix. It was just the latest chapter in their difficult marriage, though the pair painted each other for over 25 years.

"This is a very interesting painting, because not only is it a self-portrait, but it also includes the sort of stigmata, this extraordinary image of her husband planted on her forehead. And this speaks a lot about the relationship, which was a tempestuous one," explains Stock.

Critics have often praised the raw, emotive artwork, capturing the artist as tears fall from her eyes. They say that Diego's position reflects how he and their relationship dominated her thoughts.

"They in fact were divorced after about 10 years of marriage, but then were reconciled. And this constant interplay between Frida and Diego is something that is brought to the fore in this painting," he continues.