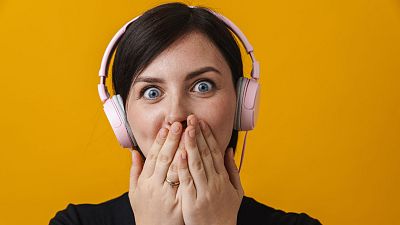 Today (24 August) marks International Strange Music Day - an occasion for stepping outside of your comfort zone and listening to genres of music that you've never experienced before.

The day was created by New York musician Patrick Grant, who believes that broadening people’s musical horizons can also change the way that society views other aspects of life.

In honour of the day, we've put together a list of 7 obscure and quirky music genres you've may never have heard of.

So grab your headphones and prepare to embrace a world of weird and wonderful music.

Lowercase is an extreme form of ambient-minimalism and was pioneered by artist Steve Roden (who coined the name).

The genre mainly consists of very quiet, usually unheard sounds, which are amplified to extreme levels.

It seeks to combat the overload of noise in the majority of music and instead focus on the intricate details heard in everyday life.

Steve Roden popularised the movement with an album entitled 'Forms of Paper', where he recorded himself handling paper in various ways for nearly 54 minutes.

Who knew a sheet of paper could be a musical instrument?

Ever wondered what you'd get if you took hip hop but made it quintessentially British?

The satirical genre originated from England and incorporates elements of British 'chap culture', stereotypical English obsessions such as watching cricket and drinking tea, with classic rap and hip-hop tropes.

Chap Hop was pioneered in the early 2000s by comedic artists like Mr.B the Gentleman Rhymer and Professor Elemental.

Vaporware is a micro genre of electronic music which emerged from the internet in the early 2010s.

The music centres around samples of elevator music, lounge music and smooth jazz from the 1980s and 1990s, which are chopped, distorted and pitch shifted to create a sense of melancholic nostalgia.

Drawing on pop culture from the past, Vaporwave places just as much focus on its visual aesthetic than the music itself.

The clear visual style incorporates old images and web design from the early days of the internet and mixes it with more futuristic elements such as cyberpunk and glitch art.

If Mario and Luigi grew their hair out, started wearing black leather jackets and playing the electric guitar, you might end up with something like Nintendocore.

The genre was pioneered in the early 2000s by Horse the Band, whose frontman Nathan Winneke coined the name of the genre.

If you are dipping your toe into Nintendocore music for the first time also check out the music of The NESkimos, An Albatross and Minibosses.

When you think of reggae you probably immediately think of Jamaica and Bob Marley and the Wailers.

But did you know that Germany has had a history with the laidback genre since the late 1970s?

The first generation of German reggae musicians were mainly white, middle-class youngsters looking to establish a different subculture for themselves.

But it wasn't until the mid 1990s, with the release of albums from German artist 'Gentleman', when the genre started to truly take off.

The Berlin-based group Seeed were able to attract a new generation of listeners at the turn of the millennium, with their unique fusion of reggae, dancehall and hip hop.

Check out their track 'Aufstehn' above.

Gabber, a sub-genre of hardcore techno, could be described as the heavy metal of the EDM world.

It emerged in the 1990s as an underground, anti-establishment movement in the Netherlands, as a reaction to the overly pop-based techno music being played in clubs at the time.

Consequently, Gabber has a much more urban sound and works to be less mainstream than most other genres.

To hear how the genre was influenced, check out the music of Marc Acardipane, Paul Elastic and Peter-Paul Pigmans (3 Steps Ahead).

The final niche genre on our list could make for the perfect listening during your next Halloween party.

Witch House is a dark, occult-themed electronic music microgenre which emerged in the late 2000s and early 2010s.

The music is heavily influenced by chopped and screwed hip-hop soundscapes, and noise experimentation.

Unbaalievable: Why were sheep herded across London Bridge?