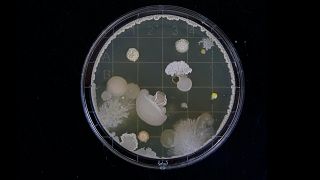 Mikeal Hwang is a man of many talents. He’s a biologist, an artist and a musician – but the music he creates is probably something you haven’t heard before.

“I had an issue with the institutional bureaucracy of science – the way scientific research had become more about capital and less about curiosity,” Hwang told Euronews Culture.

Known under his musical alias, Psients, Hwang has forever balanced on the fence between art and science. His background as a biomedical researcher inspires the experimental approach to his music – with his artistry often brushing shoulders with scientific issues.

His previous project, for instance, touched on the possible impact COVID-19 had on air pollution in Korea.

“Music was always a continuous part of my life,” he recalls.

His parents were both hobby musicians – his mother a singer and his father a tuba player.

He started DJing in college, eventually becoming a “semi-professional” in Seoul, South Korea, in 2016. The city’s thriving underground electronic music scene was a huge inspiration for him.

“It really helped me create a foundation for my artistry based on sound,” he says.

“At the end of my MSc (Master of Science degree) in London, I had this idea of listening to cells. At the time, I was engaged in a specific kind of research that looked at using electricity as a medicine – that kind of research got me thinking about various ideas regarding the intersection of things,” he explains.

Hwang thought that instead of using electricity for therapeutic purposes, he could focus on listening to cells instead. “I wanted to pursue this as a PhD but I suppose the idea was a bit esoteric or outlandish for the scientific community at the time.”

Unable to secure funding, Hwang was forced to put his scientific career on hold and return to South Korea. But his vision of listening to cells was unshakable.

“It left an undeniable impression,” Hwang says. “It was then that I had the idea of simplifying the subject matter, making it into an artistic manifestation, and allowing people to listen to sounds from a small microscopic thing and get them to think of it the same way I was envisioning.”

That’s how Hwang’s installation and EP ‘Signal’ was born, a project at the intersection of biology, sound, and music.

Supported by the Paradise Cultural Foundation, an art foundation based in Incheon, South Korea, the project was on exhibition for 10 days from May 19 to May 29 – displayed alongside other technology-based art projects. The audio-visual installation, which launched at the same time as ‘Signal’, is one of the only musical instruments in the world that is literally alive.

“’Signal’ ultimately boils down to three components: the music, the object and the instillation,” Hwang notes. “I first obtained sound samples of cellular vibrations of yeast cells, which I could then stretch and manipulate to create these new kinds of digital hybrid instruments.”

But the music wasn’t enough for Hwang.

“I felt that the music alone didn't communicate to the general public what this project was all about.”

This realisation led him to team up with spatial designer and Head at JART Atelier Design Studio Jeffery Jehwan Kim, who found a way to listen to biology and create a space in which people can experience it.

To do so, Hwang took inspiration from fundamental tools used in biology and music: the Petri dish and the vinyl record.

“I was inspired by Petri dishes we grow microorganisms in, and biology all across the world. It's just a basic tool of microbiology, and I hybridise that idea with a record like a turntable.”

“I customised the design of a record so that there is an empty compartment formed within it – encasing and inoculating a live culture of yeast inside of it,” Hwang explains.

“We then carved the top of the plastic disk with the music to create the object, which to my knowledge is the very first living music media. Collaborating with Jeffery J. Kim allowed us to create this space in which people could experience the music and the objects within the environment. It allowed us to imagine ourselves within the cell of the yeast and listen to its vibrations.”

A deeper insight into the role of biology in culture

The end game for Hwang was always to “get people to start thinking about biology’s role in culture” through art, a mission which has arguably never been more relevant.

He suggests that with more public awareness, crises such as the COVID-19 pandemic could have taken a different turn.

“Perhaps it could’ve played out in a very different way if people had a better understanding of how to deal with invisible microorganisms.”

“My goal with Jeffrey J. Kim was also to get people to think about how microorganisms or biology can play a role in music,” he continues. “I do believe that the future of sound is biological. ‘Signal’ was just my first iteration of expressing that idea.”

So, what next for the Petri dish performer, now that the EP has been shared with the world?

Hwang has set his sights on going further down the musical microorganism route, aiming to create a musical instrument that is completely alive in the future.

“I want to create an instrument that is alive, that I can perform with. At the end of the show, the living instrument could perish and create a one-time musical event.”

What happened when Iran criminalised music?