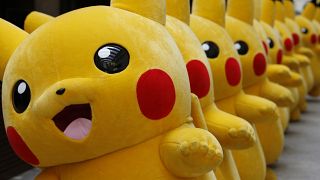 The Pokémon World Championships have come to an end   -   Copyright  Shizuo Kambayashi/Copyright 2016 The Associated Press. All rights reserved. This material may not be published, broadcast, rewritten or redistribu
By David Mouriquand  •  Updated: 22/08/2022

The Pokémon World Championships, held in London at the ExCel arena, has come to a close.

After a three-year absence due to the pandemic, this year’s event marked the return of the biggest offline Pokémon competition. It ran from 18-21 August and saw five thousand competitors from over 57 countries play for a chance to be crowned Pokémon World Champion. It was the first time the trading card contest was held in Europe.

Hundreds of tables were filled with players, who battled their opponents with their carefully curated decks of Pokémon trading cards. Several so-called Pokémon Professors were on hand to steer beginners through the basics of a competitive game, while the veterans dived into games full of micro-tactics and ingenious strategies.

There's a nice cash prize too - the shared sum this year amounted to one million dollars.

But beyond these successes and the fact that Pokémon continues to be one of the most identifiable franchises out there, did you know about the phenomenon's darker past?

The Darker Side of Pikachu

The Pokémon franchise has been a pop culture mainstay for 26 years now, with cartoons, cards, films, video games and the launch of Pokémon Go in 2016 contributing to its ever-expanding universe.

But one incident in 1997 nearly threatened to collapse the whole series and send the ‘pocket monsters’ out to pasture.

Indeed, before Saudi Arabia banned Pokémon for promoting polytheism (meaning that you can only watch Pokémon in Saudi Arabia in English) and Sweden briefly banned the TV show for advertising tie-in merchandise and games (it's illegal to advertise to children in the country), the Pokémon show very nearly put lives in danger.

In the early evening on 16 December 1997, 685 children (310 boys and 375 girls, according to Japan’s Fire Defence Agency) were taken to hospitals in Japan with complaints of sudden illness, akin to epileptic seizures. The symptoms varied: headaches, dizziness, nausea, seizures and even loss of consciousness.

Over 1,300 children were absent from elementary schools the next day.

They all became ill at approximately 6:50pm, while watching episode 38 of the original Pokémon cartoon, titled “Dennō Senshi Porygon”. An explosion caused by the Pikachu character detonating rockets appeared on screen as blue and red blasts of colour.

Thankfully, all the children recovered, having suffered from what was reported as Photosensitive epilepsy, or PSE, as a result of this 12 Hz alternating red/blue stimulus and Transmitted Light Photographing.

The unprecedented incident was referred to as “Pokémon Shock” by the Japanese press, and it later transpired that other viewers had experienced mild symptoms. Over twelve thousand children who were not sent to hospital had symptoms more akin to mass hysteria than a seizure.

The shares of Nintendo, which produced the games, fell by 3.2%, and the episode was pulled. The furore caused the Pokémon anime go take a four-month hiatus, before returning on 16 April 1998.

Japanese television broadcasters and medical officials joined forces to ensure there would be no repeat performance, leading to a series of guidelines for future programmes. It was decreed that flashing images should not be displayed for more than two seconds and should not flicker more than three times per second, especially those featuring the colour red.

The incident lives on in infamy and the Pokémon anime was recognised in the 2008 Gamer's Edition of the Guinness World Records book as holding the record for "Most Photosensitive Epileptic Seizures Caused by a Television Show".

Nintendo couldn’t have been thrilled about that.

Still, with over 30 billion Pokémon cards sold worldwide and nearly 750 million people having downloaded the app by the end of 2021, their past 'paka paka' woes probably don’t keep company execs up at night.

Check out the video above for footage of 2022's Pokémon World Championships.

Pokemon and Super Mario help Nintendo back into profit