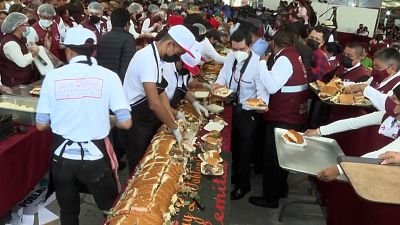 A team of local restaurateurs worked together in Mexico City to break the local record for the longest ‘torta’.   -   Copyright  AP Photo
By Katherine Berjikian  •  Updated: 04/08/2022

A team of local restaurateurs in Mexico City got together on August 3 to break two local records: the size of a gigantic ‘torta’, and the speed it took to create it.

The huge snack was an homage to different local sandwiches, and its final version stretched to an impressive 74 metres long.

The team of chefs made it in just 2 minutes and 9 seconds.

The audience at the Torta Fair 2022 was allowed to buy a portion once the cooks finished it.

Each slice, which included fillings ranging from pork, beef, and chicken to buffalo, crocodile, ostrich, and venison, cost 35 pesos, or €1.6.

While these local records, granted by the Mexico City government, are impressive, it doesn’t stand a slice against the world record for the longest sandwich.

That honour goes to a sandwich constructed in May 2011 in Beirut, Lebanon, an achievement stretching over 735 metres long, which took 22 hours to make.

And even that was dwarfed by the longest pizza, according to Guinness World Records.

The award was bestowed in 2017 in the United States when more than 100 people helped bake a pizza that extended to 1,930.39 metres long. It took over 54-hours to make and no figures state how long it took to eat.

Want to live longer? Keep the salt shaker off your dining table