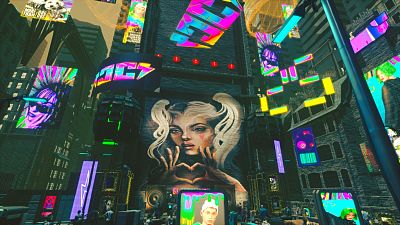 Imagine a world where your digital identity is as important as your real-life one. Where you need assets and belongings for your virtual self like money (cryptocurrency), a home (perhaps built on Minecraft) and clothes.

As we increasingly live our lives online, fashion brands are betting on the idea that some consumers are already there with the launch of digital clothing collections and collaborations with gaming platforms. In 2022, the hottest trends and most anticipated launches won’t be heading down the catwalk, they’ll be playing out on our screens as designers explore the metaverse.

The term ‘metaverse’ was coined by science fiction author Neal Stephenson in his 1992 book Snow Crash. It’s a space where humans interact in a virtual environment as 3D avatars.

Today, that is becoming less like fiction as we work, socialise, learn and spend our leisure time on the internet, but there’s a crucial difference between our lives now and the metaverse.

“I would describe the metaverse as a virtual space that is not confined to one social or gaming environment. It is a virtual world where you can, for example, wear the same digital clothes in all spaces. It’s not there yet but the groundwork has been laid,” says Kristina Dimitrova, a brand consultant and founder of fashion and technology platform Interlaced.

Much of the groundwork for fashion’s foray into the metaverse was laid in 2021, paving the way for bigger things to come next year. In May, Gucci Garden launched on Roblox, a branded virtual space including rooms themed around historic campaigns and a place to try on and purchase limited-edition digital clothes from the brand.

In September, Balenciaga became the first luxury brand to partner with video game Fortnite on a range of outfits for characters, known as ‘skins’. It also released a physical range of merch to coincide with the digital launch.

Dimitrova says that this blurring between the physical and virtual world is something we’ll see more of in 2022. “As a gamer, you could pay for the skins or earn them in the game or go out a buy a real product from select stores to wear it in real life. I think we’ll see a lot more brands connecting online and offline worlds like this.”

This is something that designer Charli Cohen also explored this year in a collaboration with Pokémon, department store Selfridges and production company RYOT Lab. Cohen created a range of digital and physical clothing pieces that were sold through Electric/City, a virtual world hosted on the Selfridges website that shoppers could explore and interact with.

Cohen’s next venture, launching soon, is one step closer to the metaverse. “I have spent the past year building RSTLSS, a platform that allows artists, brands and their fans to easily create custom, interoperable Metaverse wearables,” she tells Euronews. “Interoperability is going to be a major focus for digital fashion in 2022 - the ability to take your digital wardrobe across multiple games and social spaces.”

These early experiments in the virtual realm might feel like a gimmick, but there’s good reason to believe this is more than a passing fad. With Facebook rebranding to Meta to reflect the scope of its work which includes building a metaverse, it’s likely to put momentum behind brand activity in this space.

Dimitrova explains the appeal of this world for fashion brands: “For fashion brands it provides another avenue to market. The stereotypical gamer was not who fashion brands have traditionally targeted. You tend to think of a 13-year-old boy in his room eating snacks but, in fact, a lot of gamers are women and people who have other interests outside of gaming, including fashion, so it makes sense. Also people who play games like Fortnite, Roblox and Animal Crossing are really engaged with those platforms so if you can add value to their experience, that’s a great brand strategy.”

Luxury brands ahead of the curve

Luxury labels have so far been the ones ahead of the curve, but the high street is playing catch up. Adidas announced early plans for the ‘adiVerse’ in November with a loyalty scheme using crypto badges and a plot of land in mobile game The Sandbox being earmarked for the brand — though more details on this have not been revealed.

Identity has evolved - there is no longer a line between the physical and digital ‘us’.

In the same month, British department store John Lewis partnered with television channel ITV on their I’m A Celebrity game experience created on Fortnite to host a branded shop for supplies.

For designers like Cohen, this digital world represents more than just a marketing opportunity but a new extension of creative possibilities: “Identity has evolved - there is no longer a line between the physical and digital ‘us’. The streets have moved into games and social media - and accurately taking your visual identity into these spaces matters as much as it does IRL. As a designer, I’m very excited to empower and facilitate that.”

While we stay tuned for more metaverse brand activations which will surely be announced in 2022, some of the most exciting developments come from the tech companies themselves. One of the most hotly anticipated launches planned for 2022 is Microsoft Mesh, which will take Teams meetings to a new level by enabling users with VR headsets to appear in virtual worlds and interact with virtual objects.

For fashion this could mean hosting digital catwalk shows where guests feel as though they are there or offering personal shopping appointments where they meet remotely with a stylist to show them the latest digital collections.

The metaverse is coming and fashion brands want to make sure you’re dressed for it.