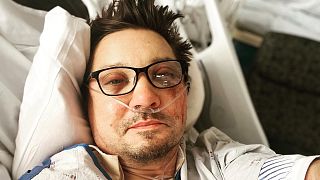 US actor Jeremy Renner has posted a selfie from his hospital bed where he's recovering from serious wounds after being run over by his 7-tonne snow plough on Sunday.

Police in Reno say he remains in intensive care with blunt chest and orthopaedic injuries following the accident at his Lake Tahoe ranch in Nevada.

A representative for the actor described the 51-year-old's condition as stable after he underwent surgery.

Renner posted an Instagram photo of himself in a hospital bed and a message, missing an apostrophe.

“Thank you all for your kind words," it said. "Im too messed up now to type. But I send love to you all.”

Renner appears to have been seriously hurt when he was run over by his own snowcat after using it to free a vehicle driven by a family member that became stuck in nearly a metre of fresh mountain snow on New Year's Day, Washoe County Sheriff Darin Balaam said.

An inquiry is underway but there are no signs of foul play or any indication Renner was impaired at the time of the New Year's Day incident, Balaam told reporters.

“At this point in the investigation...we believe this is a tragic accident,” the sheriff added. “He was being a great neighbour and he was plowing those roads for his neighbours."

In a statement from the actor's representative said "Jeremy's family would like to express their gratitude to the incredible doctors and nurses looking after him, Truckee Meadows Fire and Rescue, Washoe County Sheriff, Reno City Mayor Hillary Schieve" and others, read the statement. "They are also tremendously overwhelmed and appreciative of the outpouring of love and support from his fans."

On December 13, the actor shared a photo on Twitter, writing, "Snowfall at Lake Tahoe is no joke."

The region was hit by a winter storm on New Year's Eve, which left 35,000 homes without electricity.

He is also a two-time acting Oscar nominee, scoring back-to-back nods for "The Hurt Locker" and "The Town." Renner's portrayal of a bomb disposal specialist in Iraq in 2009's "The Hurt Locker" helped turn him into a household name.

"The Avengers" in 2012 cemented him as part of Marvel's grand storytelling ambitions, with his character appearing in several sequels and getting its own Disney+ series, "Hawkeye."