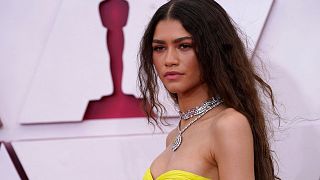 Zendaya has defended her show 'Euphoria' against critics accusing it of glorifying substance abuse, saying it isn't a "moral tale".

The 25-year-old, who leads the series as teen drug addict Rue Bennett, made the comments in light of US drug education group D.A.R.E. slamming the programme for "glorifying" narcotics and "misguidedly and erroneously" depicting high school drug use.

Zendaya insisted the show has set out to reassure viewers they are not "alone" in their struggles, but it's never encouraged the audience to live their lives in a particular way.

"Our show is in no way a moral tale to teach people how to live their life or what they should be doing," she told Entertainment Weekly in an interview.

"If anything, the feeling behind ‘Euphoria,’ or whatever we have always been trying to do with it, is to hopefully help people feel a little bit less alone in their experience and their pain."

'Euphoria' has been accused of glorifying addiction and violence

'Euphoria' draws from writer and director Sam Levinson's experiences as an opiate addict.

At the age of 19 he checked into rehab for a final time and has stayed sober for 18 years.

On 26 January D.A.R.E – founded by former LAPD chief Daryl Gates as a preventative program for drug and gang education – said Euphoria fails to inform viewers of the "potentially horrific consequences of drug abuse and other high-risk behaviour"

"‘Euphoria,’ chooses to misguidedly glorify and erroneously depict high school student drug use, addiction, anonymous sex, violence, and other destructive behaviours as common and widespread in today’s world," they said in a statement.

They also criticised “HBO, social media, television programme reviewers, and paid advertising" for framing the show as "groundbreaking" rather than a negative influence on young people.

Fans have argued the statement fails to acknowledge the complex issues being dealt with on the show, such a trauma, loss and identity.

Though the show is centred around a cast of characters in high school, it is rated 18 across the board.

Online defences of 'Euphoria' also pointed to the Zendaya's storyline as an anti-drug message in itself.

The fifth episode of season two, which aired on 6 Feb, showed Rue plunging to excruciating lows as she suffers drug withdrawal.

d.a.r.e. said euphoria glorifies drugs meanwhile this episode could be played at an anti-drug seminar...

and D.A.R.E said euphoria glamorizes drugs???? rue got me scared to take my birth control #Euphoriapic.twitter.com/mVV7ps5bVD

This episode is working better than any D.A.R.E. commercial ever could bro

Will Rue get a happy ending?

Zendaya says this instalment of the HBO series culminates in an intervention for her character.

The actress called the plot arc the "light at the end of the tunnel".

She hopes her character's experiences allow viewers to gain “a little bit more understanding and [be] empathetic over the experience of addiction.”

“My biggest hope is that people are able to connect to it and those who need to heal and grow with Rue hopefully, by the end of this season, feel that hope and feel that change in her."

While working on the show, Zendaya has heard from a lot of viewers who see "parallels" from their own lives and admitted their messages mean a lot to her.