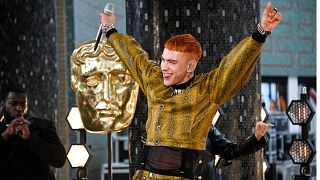 The singer shot down speculation after becoming the favourite to replace Jodie Whittaker   -   Copyright  AP Photo
By Shannon McDonagh  •  Updated: 23/11/2021

Earlier this month, Olly Alexander "categorically" denied he is set to take over as Doctor Who.

Representatives for the It's a Sin actor shot down reports suggesting he was in line to replace the current Time Lord Jodie Whittaker back in June, and the Year & Years singer told British GQ in a new interview that the reports about his Doctor Who negotiations were news to him.

When asked if becoming the Doctor was ever going to happen, he simply replied, "No. Never. No."

He was then asked if he had any desire to lead the long-running BBC sci-fi show, and he responded, "No. I thought it was quite glamorous and exciting when there was a rumour about it, when The Sun reported that I was in final talks for being the next Doctor.

"That was news to me. I know how much that part means to people and was very flattered and touched that people thought I might be. But I can categorically tell you that I am not the next Doctor."

Nevertheless, this has not dissuaded the bookies who have seen Alexander move back up the odds charts.

Who is in the running to be the next Doctor?

Alexander's rebuttal may come as a disappointment to fans of the star's working relationship with Russell T. Davies, who makes his return to the show after a 12-year absence.

Fans of the partnership might not want to rule the 31-year-old out just yet - leads cast in big-name television are often advised to keep any discussions under wraps, and betting aggregators Oddschecker have him as second favourite.

He previously cast Alexander to lead 80s drama It's A Sin, documenting the HIV epidemic as it unfolded across London. The miniseries was received widespread acclaim and summarised by Rotten Tomatoes as "small-screen magic".

In the event that the actor really is telling the truth - who could take over from Jodie Whittaker as the 14th Doctor?

Whovians have turned to another Davies collaborator in the wake of Alexander's denial.

Lydia West, who has worked with the writer and producer on It's A Sin and the HBO drama series Years and Years.

Her work with the producer makes her a firm favourite across the board - earlier this month, bookmakers across the UK suspended bets on the actress becoming Number 14, though this seems to have resumed.

This wouldn't be West's first time delving into the Timelord's universe. Last year she starred as Vivien in the audio drama 'Doctor Who: The Sorcerer of Albion' by the award-winning Big Finish Productions. She has also worked with prior Dr.Who showrunner Stephen Moffat on several occasions.

At the age of 28, she'd be the youngest ever Doctor and the first person of colour to take on the role.

Vying for second and third: Olly Alexander and Michael Sheen

A Radio Times poll of over 10,000 Doctor Who fanatics saw Michael Sheen as the favourite to replace Jodie Whittaker when her time is up.

The 'Good Omens' star received 20 per cent of the vote. Like other contenders, he is no stranger to the sci-fi institution, and once voiced 'House' in the Doctor Who story 'The Doctor's Wife'.

Sheen is best known for his spookily accurate portrayals of British public figures, such as journalist David Frost in Frost/Nixon and television host Chris Tarrant in the 2020 drama serial 'Quiz'.

T'Nia Miller played a small role as the Twelfth General in the Doctor Who television story Hell Bent quite some time ago when Peter Capaldi was still in the role.

Like West, she'd be the first Black woman to occupy the TARDIS and has worked with returned showrunner Davies on Years and Years, where she played a lead role as Celeste.

This, and her time starring in Netflix's 'The Haunting Of Bly Manor' mean Miller is booked and busy for the time being - she worked on three separate productions in 2021 alone.

Nevertheless, she's still a favourite but was second in the rankings a few weeks ago.

With so many names in the mix, a list of outliers have quickly formed as a result of the fandom's daydreams.

Kooky comedian Russell Brand has received some bets on the basis he expressed a desire to be the Doctor in 2013. Actually becoming the Doctor is another story - his return to acting after a stint in Hollywood has fallen pretty flat.

Award magnet Olivia Colman - arguably the UK's most in-demand actress - has also been subject to speculative punts, but there's no evidence to support her casting other than starring with former Doctors David Tennant and Jodie Whittaker in Broadchurch.

Speaking of Tennant, the casting of his former companion Catherine Tate would be a dream for fanatics of their tenure. Her four-year stint as Donna Noble was the subject of apprehension at first, due to her history as a comedic actress, but ultimately went down a treat.

It'd be the first time the Doctor's companion has returned as the Timelord in this capacity, but could be a double-edged sword as far as explaining that shift is concerned. For this reason, it looks unlikely.

Along with the other outliers, lies Sherlock's Benedict Cumberbatch at 66-1. Once talked about as a shoe-in for the role, but his indelible imprint on the modern Holmes has rendered him unlikely to take on the double-hearted Timelord.

When do Jodie Whittaker's last episodes playing the Doctor air?

Whittaker surprised the British media with her appointment as the 13th Doctor in 2017 - a woman had never been selected for the role before.

She finished filming her scenes this year and recently insisted on UK's Graham Norton Show that she doesn't know who her replacement is.

The actress explained that she wasn't there when her predecessor Peter Capaldi filmed his final scenes.

"They are never going to tell me who it is," she stated. "We filmed some scenes, but the new Doctor wasn't there. I wasn't there for Peter, and I only met him months later when I passed him in the street!"

After the current six-episode series Flux, the actress will play the Doctor in three specials across 2022, with her final episode due to air in late 2022.

'Rust' film armorer says someone may have put bullet in gun

Can the secret to Russia's vodka be found in this museum?