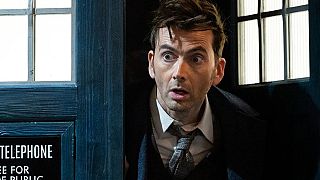 Last night, the final episode of Jodie Whittaker’s tenure as Doctor Who aired. Making history as the first woman to play the time-travelling alien, Whittaker bowed out in a surprise regeneration where she turned into previous Doctor actor David Tennant.

The return of Tennant is a significant choice. The episode also saw the Whittaker era’s showrunner Chris Chibnall step down to be replaced by Russell T Davies, the man who brought Doctor Who back on British screens in 2005 after its cancellation in 1989.

Bringing back Tennant, who played arguably the most popular Doctor at the point of the show’s zenith is a clear play to reignite interest in the series. The long overdue decision to cast a woman in the title role initially brought many people back to the series. Viewership figures have been declining since Whittaker’s arrival though, and under Chibnall’s stewardship, the show has floundered.

Last night’s finale ‘The Power of the Doctor’ was just the latest convoluted mess of an episode disengaging all but the most fervent fans from the series. A populist take, helmed by the show’s most well-known actor and one of TV’s most successful writers is desperately overdue.

'The Power of the Doctor' was a bumper episode running to 90 minutes, essentially a feature length film. With such an extended runtime, it is natural that the episode would feature more content than a standard one. But this episode was overstuffed more than a Thanksgiving turkey.

Aged around 10, I remember sitting down with a friend to write the “ultimate story” with all the characters and their antagonists from our favourite shows fighting each other.

Our plan was thrown out after my friend’s joyous father schooled us in copyright violation. He should have told us though that we’d have done a better job at writing the finale than Chibnall.

The episode contained all three of the Doctor’s arch nemeses: the Daleks, Cybermen and the Master. It had countless cameos from companions from as far back as the 60s, as well as previous Doctor actors.

But with each fan-pointed set piece, the drama of the episode faltered. It’s first evident with the opener. A frantic train hostage situation that the Doctor and her companions Yaz and Dan foil. No sooner is that over, Dan decides to depart the TARDIS crew.

Historically, companion departures are emotional affairs but this one is handled so briskly that Dan, played by John Bishop, may as well have looked straight into the camera and said “Sorry, the writer couldn’t find room for me in this one.”

The rest of the episode plays out the same. The pace never lets up, introducing exhausting elements that are ostensibly there to heighten the drama.

The plot lurches between 1916 Russia, a space station above the earth, Vesuvius, and an office block in London 2022. But the time is never taken to increase the emotional stakes. Instead, with every additional villain, the plot point amounts to repetitive drudgery.

The drudgery infects the plot at every level. One of the focal points of the episode is the return of Tegen, a companion played by Janet Fielding who hasn’t been on the show since 1984.

Tegen’s return is only immediately significant to the biggest fans of the show and viewers over the age of 50. Not necessarily a problem if she had been given the time and space to be a character in her own right.

No such luck. Instead, Tegen’s addition is wooden (as is Fielding’s acting) and it is bunched up next to similar cameos from another 80s companion, the return of one of Whittaker’s previous companions, and endless other cameos.

At the heart of the episode’s failure is a misunderstanding of the idea of fanservice. It’s often spoken about in the media around superhero films and other longstanding IP series.

Fanservice should boil down to delivering a good episode / film / book. What else could fanservice be than providing a good iteration that fans can enjoy?

Instead, it’s almost always interpreted as bringing back cult favourites to briefly stand in front of screens and say an old catchphrase. It can be done well, but for the most part and in 'The Power of the Doctor', it is used to create an endless slog of Instagrammable moments for uberfans to point out they recognise the continuity between now and when the show was in black and white.

The fanservice of the episode felt like it took up 80 minutes of its 90 minute runtime. It’s dull and the antithesis of good writing. But at least fans got to see Ace call the 7th Doctor “Professor” again. It’s like it’s 1989 again!

Hopefully they can take down the Berlin Wall again and one of the bricks will land on my head.

Beyond tiresome cameos, the show’s one success is Sacha Dhawan’s portrayal of the Master. Chewing the scenery and understanding the camp nature of the show, Dhawan runs rampant with a manic performance that keeps things whizzing along. A singalong to Boney M.’s ‘Rasputin’ as he is in disguise as the Russian mystic is a highlight.

Then finally it comes time for the Doctor to regenerate.

Whittaker’s death scene itself is laughable. She’s seemingly just thrown aside by a planet obliterating lazer. Never mind, at least she now has the chance to give closure on the love subplot between her and Yaz.

But that doesn’t happen either. The two stare into each other’s eyes briefly before having an ice cream and the Doctor telling Yaz to do one. Yaz is quickly booted from the TARDIS to attend a Companions Anonymous session for other spurned characters in the show’s 60 year legacy.

This leaves Whittaker to finally regenerate. With a pithy final line that underscores the lack of emotional depth in the era, Whittaker bows out to revert back to a more successful incarnation. A preview shows the eventual regeneration into Ncuti Gatwa - the first full-time Black Doctor is yet to come.

For now, we have Tennant back and this most recent episode, part of the BBC’s celebration of 100 years of its existence. The cacophony of elements from the show’s history may have been put together in the name of celebration, but it’s nothing more than hollow navel-gazing.