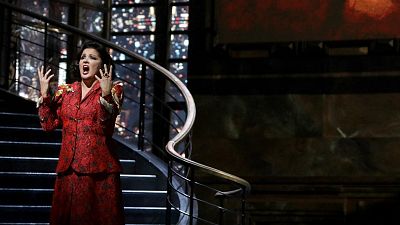 Russian-Austrian opera singer Anna Netrebko made her return to the Philharmonie de Paris this week.

The soprano has hit headlines multiple times for her unwillingness to condemn Russian President Vladimir Putin.

Her return to the Paris stage comes after the concert was postponed three times due to COVID-19.

Withdrawal from the New York Met

The Russian soprano was first put under fire when she withdrew from her performances at the New York Met Opera in March, for refusing to criticise Putin’s regime after the start of his invasion of Ukraine.

“Failing to comply with Met conditions to repudiate her official support for Vladimir Putin's war in Ukraine, soprano Anna Netrebko has withdrawn from her upcoming concerts at the Met for Puccini's 'Turandot' in April and May as well as for Verdi's + Don Carlos + in the next season,” the Met Opera said in a statement at the time.

Although Netrebko has never outwardly expressed direct support for Putin, criticism has been levied against her for a 2015 trip to Donetsk, one of the main disputed regions between Ukraine and Russia in the lead up to the 2022 war.

Netrebko was pictured posing with the flag of pro-Russian separatist rebels. She also courted controversy when she handed over a cheque for one million roubles (around €15,000) to pro-Russian Ukrainian leader Oleg Tsarev.

At the time, Netrebko responded claiming that she was only interested in supporting the arts and the Donetsk Opera, which had lost funding from Ukraine. She also assured that she had “never received financial support from the Russian government” and had never allied herself with “any Russian leader.”

In March, the 50-year-old singer declared that she was “opposed to this senseless war of aggression” and called on Russia “to end this war right now.”

"I am not a member of any political party nor am I allied with any leader of Russia,'' Netrebko said in late March. "I acknowledge and regret that past actions or statements of mine could have been misinterpreted."

Following this announcement, the Opera Monte Carlo booked her to sing the title role in Puccini’s ‘Manon Lescaut’ in April.

The Opera Monte Carlo told Euronews at the time that the choice was “an artistic one.”

"Anna Netrebko made a statement two weeks ago regarding the war and her relationship with Putin. She has taken a clear position against the war in Ukraine," Opera Monte Carlo said.

"As a consequence she has been declared an ‘enemy of the homeland‘ by the speaker of the Duma and a theatre in Novosibirsk cancelled her appearance. Our choice is an artistic one."

Now, Netrebko has returned to another great European stage, the Philharmonie de Paris. But a recent interview has put her under the spotlight again.

Speaking to Le Monde, she reiterated that she was “not guilty of anything,” and that her only mistake was not to have “informed herself more about the situation in Donbass.”

"I was also asked to declare myself against Vladimir Putin. I replied that I had a Russian passport, that he was still the president, and that I could not say those words publicly. So I refused," she added.