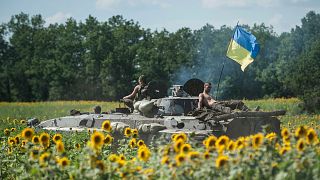 Ukrainian troops ride on an APC with a Ukrainian flag, in a field with sunflowers in Kryva Luka, eastern Ukraine   -   Copyright  AP Photo
By Jonny Walfisz  •  Updated: 30/03/2022

A new viral clip showing a cartoon tractor dragging along a Russian tank has surfaced in Ukraine.

The cartoon, posted first to TikTok by user @paolo_zandar has made waves across social media.

Even Ukrainian cartoons are getting in on the action pic.twitter.com/jAoyNlD8vw

In the clip, a blue cartoon tractor is towing a Russian tank, clearly signified by the ‘Z’ emblazoned on its side. Russia has been painting ‘Z’s on the sides of their military vehicles during the invasion of Ukraine to help distinguish their tanks to avoid friendly fire.

Another user responded with a photoshopped image of a Lego set for a “Free Russian Tank” that has a red Ukrainian tractor towing a Russian tank.

This, new in from @LEGO_Group.https://t.co/88QJsN8vTKpic.twitter.com/oR7qe0an59

What is the actual cartoon about?

While many English speakers find the image of the tractor pulling the Russian tank funny, the origin of the cartoon may not be obvious.

The original cartoon that has been altered to fit the tank is of a popular children’s song in Russian called “Blue Tractor”.

In the song, different tractors pull a wagon with an unknown animal in it, which children watching have to guess by the sound the animal makes.

The lyrics, unchanged in the new video, has the tractor asking audiences,

who is singing the song”

You can watch the original song here:

In the original version, it is actually a red tractor that is towing the sheep. But in the new version, the classic blue tractor has likely been chosen to complement the yellow fields, clearly evoking the Ukrainian flag.

Ukrainian memes in times of war

The tank version of the Blue Tractor is by no means the first viral meme that has come from Ukraine as Russia continues its invasion.

Saint Javelin has become one of the most consistent images across Ukrainian social media. The image of Mary Magdalene holding a FGM-148 Javelin anti-tank missile launcher while dressed in khaki colours and with a Ukrainian halo has become a persistent image during the conflict.

Christian Borys, a Ukrainian-Canadian marketer and former journalist also set up a fundraiser page alongside a St Javelin merchandise store to aid in Ukraine’s war effort. So far the website has raised over $400,000 (€358,000) for Help us Help, a Canada-registered Ukrainian charity, by selling items bearing the saint's likeness.

One of the biggest memes to proliferate during the Russian invasion of Ukraine is the phrase “Russian warship, go fuck yourself”. The statement was the last message sent by Roman Gribov, a Ukrainian soldier stationed on Snake Island during a Russian attack.

The postage stamp named "Russian warship, go f**k yourself!" will appear in??. The sketch by artist Boris Groh received the most votes and will soon be published by Ukraine's state postal company.
??✌️#StandWithUkraine#StopRussianAgressionpic.twitter.com/ByYAzw2tYq

Since then, the phrase has become a stalwart of anti-Russian-war placards and has even been the subject of a national competition for a new stamp by the Ukrainian postal service.

Can the weather be weaponised? Where climate data and art meet