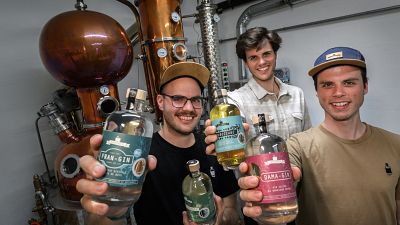 In the picturesque mountainous Swiss village of Souboz, three brothers are determined to keep their local economy alive by capturing its essence in a bottle.

The nature-loving Gyger brothers (Tim, Luca and Gaetan) distil whatever they forage, such as gentian roots and juniper, to create original Swiss gin, vodka and whiskey concoctions under the brand name Gagynole.

As more and more young people from small Swiss villages move to the cities for jobs and opportunities, the Gyger brothers hope to prove that there is still opportunity up in the mountains.

The threat of depopulation

As the population shifts towards the lower-lying towns and cities, the Swiss mountain villages are emptying, their grocery stores are closing and, as in Souboz, the schools are shutting.

The Gyger brothers were able to transform their grandfather's old home into the Gagynole distillery thanks to a grant from the Swiss Mountain Aid foundation.

The privately-funded foundation provides funding to hundreds of entrepreneurs to bring jobs and business to the hills.

The mountains are "part of our genes, our DNA", said the foundation's chairman Willy Gehriger, adding, "if we want to keep the mountains alive, there must be people."

Message in a bottle

The Gyger brothers are on a mission to repopulate Souboz and revive the economy in the Swiss Jura region.

"We're aware of doing something good for Souboz. Our mountain regions have enormous potential. They're really something that we Swiss should be proud of," said middle brother Luca Gyger, 27.

So far, the family business has paid off. Last year, they produced 18,000 bottles of spirits and one of their creations was voted the best gin in the country.

While the distillery isn't currently exporting their products to other countries, it is in consideration for the future.

"We always refused because it was difficult in terms of logistics, but why not ... as long as it goes with our philosophy," said 26-year-old Tim Gyger.

"We are going to try to grow a little bit more, but then we will try to stay at a human scale to continue to take the production from A to Z, to continue to have the philosophy that we have now," he explained.