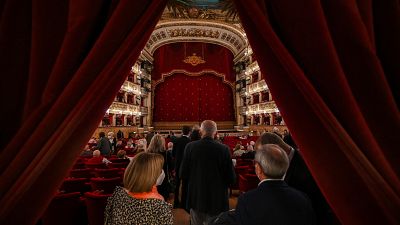 Espresso might have not made the cut, but the Italian opera is seeking to be recognised on UNESCO’s prestigious list of intangible global heritage.

Faced with a tough choice between two pillars of Italian culture hoping to seek UNESCO’s international recognition, the Italian National Committee for UNESCO has decided to push forward the candidacy of the art of opera singing over that of Italy’s beloved 'caffè'.

“With the candidacy of the Italian opera to the world's intangible heritage, Italy is aiming to get recognition for one of its most authentic and original cultural expressions,” said the country’s culture minister Dario Franceschini after the committee's decision.

From Giuseppe Verdi’s Aida to Giacomo Puccini’s La Traviata, Italian opera is among the most famous and most performed around the world.

Opera singing in Italy as we know it was born in the 17th century in Florence and later expanded across the whole Italian peninsula, flourishing in the 18th century around Naples, the pulsing heart of Italian opera, and then in the 19th century in Naples, Rome and Venice.

You might not speak a word of Italian besides pizza and pasta, but if you play music it is very likely you’ve used musical terms like ‘allegro,’ ‘adagio,’ ‘vivace’ and ‘prestissimo’ - all Italian words coming from an old musical tradition. And even if you don’t play music yourself, you will know other Italian words that have crept into English vocabulary around music, like opera, soprano and piano.

Today, there are more than 30,000 people working in the opera sector in Italy, including singers, teachers, researchers, historians, composers and directors. The country also holds the world record for opera houses, boasting 60 on its territory.

Unfortunately, the opera is among the sectors which have been hit the hardest by the pandemic in Italy, between closures and restrictions, and it’s now looking for a renaissance.

Sure, there are other great opera traditions in Europe - like the French and the German but there’s nothing quite like the Italian opera says Stephane Lissner, the French director of the San Carlo theatre in Naples, which claims to be the oldest opera house in the world.

Lissner gave the example of a recent performance of “Va, pensiero” from Verdi’s Nabuccoby by a choir in Odesa, Ukraine in March.

He described the performance in Odesa as "yet more proof of how Italian opera singing is an integral part of the world's cultural patrimony, which provides light, strength and beauty in the darkest hours".

The song has a highly political relevance, as well as an emotional one, as it also used to be the hymn of Italian patriots fighting against the Austrian occupation in the 19th century.

“This [UNESCO] candidacy comes at a time when the images of the Odesa Opera’s choir singing Nabucco’s “Va, pensiero” in the streets under the Ukrainian flag are still fresh in our memory,” Italian culture minister Franceschini said.

If Italy’s bid is accepted by UNESCO, Italian opera would be recognised on the list of the world’s intangible cultural heritage next year.