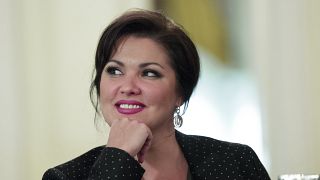 Netrebko attends a news conference at the premiere of Manon Lescaut in the Bolshoi Theater in Moscow, Russia in October 2016   -   Copyright  Alexander Zemlianichenko/AP
By Euronews  with AP  •  Updated: 15/04/2022

Opera Monte Carlo has hired Russian soprano Anna Netrebko, after the singer released a statement saying she's against the war in Ukraine.

Netrebko was previously dropped by the Metropolitan Opera in New York after failing to distance herself from Vladimir Putin and the Russian invasion.

However, Netrebko now says she is "opposed to this senseless war of aggression" and went further to say she is "calling on Russia to end this war right now."

"I am not a member of any political party nor am I allied with any leader of Russia,'' Netrebko said in late March. "I acknowledge and regret that past actions or statements of mine could have been misinterpreted."

What does Opera Monte Carlo have to say?

Opera Monte Carlo has booked Netrebko to sing the title role in Puccini's 'Manon Lescaut' for four performances later in April, replacing Maria Agresta who had to cancel for health reasons.

The company says the choice to hire her was "an artistic one."

"Anna Netrebko made a statement two weeks ago regarding the war and her relationship with Putin. She has taken a clear position against the war in Ukraine," Opera Monte Carlo tells Euronews.

"As a consequence she has been declared an ‘enemy of the homeland‘ by the speaker of the Duma and a theatre in Novosibirsk cancelled her appearance. Our choice is an artistic one."

Netrebko, who is from Krasnodar, received the People's Artist of Russia honor from Putin in 2008. She was photographed in 2014 holding a Novorussian flag after giving a 1 million ruble donation (then $18,500) to the opera hose in Donetsk, a Ukrainian city controlled by pro-Russia separatists.

She said in late March she met Putin "only a handful of times in my entire life, most notably on the occasion of receiving awards in recognition of my art or at the Olympics opening ceremony.''

What happened with the Met Opera role?

Netrebko, 50, had been due to perform in the Met's production of Puccini's Turandot in April and May, and in Verdi's Don Carlo next season as well.

However in early March the opera released a statement saying she had withdrawn from the performances for "not complying with the Met’s condition that she repudiate her public support for Vladimir Putin while he wages war on Ukraine."

The Met's general manager said at the time it was "a great artistic loss for the Met and for opera,” but "with Putin killing innocent victims in Ukraine, there was no way forward.”

After calls by Ukraine's ambassador for audiences to boycott a planned performance by Netrebko in Hamburg, the soprano said she was suspending her performances, effectively going into a self-imposed cultural exile which now looks to be over.

Opera singers gather in Lviv for rendition of the national anthem

Anna Netrebko off the Met Opera programme for silence on Putin