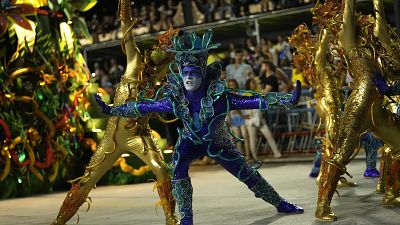 Brazil's top Samba schools performed on the last day of the Carnival parades in Rio de Janeiro and São Paulo on Saturday.

The Sambadrome, which during the pandemic was turned into a vaccination centre, has been home to the Samba schools parade since the 1980s.

Rio's carnival officially began on Thursday after authorities made the decision to postpone the February event when COVID-19 figures skyrocketed with the arrival of the Omicron variant.

Smaller and usually itinerant street carnival bands were the main Carnival attraction outside the Sambadrome, after big traditional street parties were not authorised for this year's Carnival.

Saturday night was the second and final day of the competition where members of the top Rio and São Paulo Samba schools performed in a bid to become the champions of each city.

Each group in the competition has 60 to 70 minutes to tell a story in music and dance, evaluated on nine criteria by the jury.

The reigning champions, Viradouro, paid tribute to Rio's epic 1919 carnival -- the first celebrated after the devastation of another pandemic, the Spanish flu.

A platform for diversity and social issues

The parade, which began with the national anthem, is more than just a dance competition and is also used to highlight important social issues in Brazil such as religious intolerance, racism and violence.

Of the 12 schools, eight chose themes dealing with racial injustice or Afro-Brazilian culture and history, loaded issues in a country where the current president has faced frequent accusations of racism.

In Rio, Samba school Paraíso do Tuiuti honoured famous people of colour from science to religion and literature.

The results will be announced later in the week.