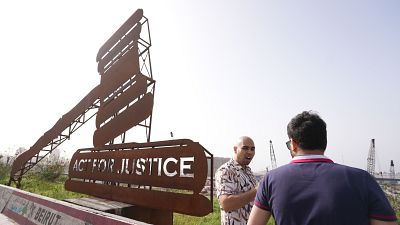 Ziad Daouk and Leonardo Moqdad stand next to the ruins of The Port of Beirut, Lebanon   -   Copyright  Ghassan Sebaaly
By Nazneen Zahan  & Priyanka Navani  •  Updated: 19/04/2022

Ziad Daouk and Leonardo Moqdad met through the NGO Ahla Fawda in Beirut. The duo share a passion for giving back to their home country of Lebanon. Ziad joined the team in 2014. "I was a student, I wanted to volunteer and have some fun," he explains.

Lebanon's humanitarian needs grew tenfold as the country fell into a severe economic crisis. The original concept of Ahla Fawda was to beautify local spaces, create street festivals and host events in the community. The NGO had no choice but to provide broader services immediately after the Beirut Port explosion. Their new mission was fixing homes, feeding and providing necessities to those in need.

"The Lebanese people face a lot, other than food and the electricity and the water and it's medication and education (they need). It's a big cluster of depression and anxiety and wanting to do something but not being able to," Leonardo tells Scenes. "So everybody's in survival mode at the moment, including me. My survival medicine could be doing humanitarian work," he adds.

Lebanon's economic meltdown began in late 2019 and has left more than three-quarters of the country's six million people, including a million Syrian refugees, in poverty. In January 2022, the Lebanese pound hit a new low of 25,800 to the U.S. dollar, eradicating the purchasing power of most of its residents who are paid in Lebanese pounds. The recent financial crisis has been described as one of the worst since the 1850s. Government debt was estimated at 495 per cent of GDP in 2021, following a rapid economic contraction.

During the holy month of Ramadan, Ahla Fawda has increased its charitable work. Each month, the NGO usually distributes up to 250 food parcels across the country to vulnerable families. However, the need is even greater this year due to food shortages. The charity aims to deliver 1,000 food parcels during April to poverty-stricken areas.

In the blast's aftermath, the electricity plants could no longer afford to supply electricity 24 hours a day, and much of Lebanon became dark. "Every Ramadan in Lebanon, you go to the Corniche and see the lights all over the trees and even in the middle of the streets. This gives the real spirit of Ramadan," says Leonardo. "This year, we have an electricity crisis. We don't have any lights. We don't have any decorations," he adds.

Ahla Fawda will provide food parcels and create Iftar meals for the civil defence. The idea of the project is to support the families of those who are working voluntarily. "They are in need. So, we're providing them food parcels that will last them for three to four weeks, for each family of four," explains Ziad.

The Lebanese civil defence is a public emergency service funded by the government. Due to the weak economy, funds are now scarce and the workers have become volunteers. The service members continue to work on the front lines, either by raising funds themselves or leaning on local NGOs, like Ahla Fawda for extra support.

"Most of the young people volunteering in the civil defence field are nurses and students and they're paying to sustain their centres," says Leonardo. "People don't know the importance of the service but it is the civil defence that puts out the fires."

The civil defence was the first to arrive on the scene after the explosion at the Beirut port. They risked their lives to save people from the blast, from under the rubble of crumbling buildings.

"I have so many friends at the civil defence that work on the front lines. When I saw pictures of them helping and seeing how many hours they spent taking people out of the destroyed area, I was like, 'Guys, you need to be appreciated somehow'," says Ziad.

Leonardo and Ziad plan to stay focused, help as many people during Ramadan as possible and increase the number of donated food parcels. They say this is their way of giving back to their home country.

"The story of the crisis transformed our relationship with this country," says Ziad, who feels that the real heroes are the people that are trying to survive in difficult conditions during this Ramadan.