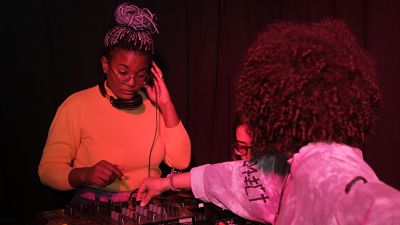 Olfa Arfaoui has been aware of gender inequality since she was young. During her violin lessons, she saw how her teacher focused more on the boys' progress in the class than the girls. She wondered why women were not as visible as men and why they were not given the same opportunities.

This pivotal moment shaped Olfa's life. Since that experience, she has actively represented women, working on a development project for gender equality in her home country, Tunisia. She opened La Fabrique, an art studio for women promoting artists and creatives. "We equip women with the skills and tools to build their careers and offer them the opportunities to enter a safe and inclusive workplace in art and culture," she tells Scenes.

Olfa never forgot her musical roots and became a DJ as an adult but again, she found that suitable spaces for women to learn were hard to find. So Olfa set up a collaboration between La Fabrique and the Future Female Sounds, a Danish non-profit organisation, to create the DJ Academy in 2018 in Tunis. The programme is the first of its kind in the MENA region that is accessible and affordable for young women.

Since then, more than 200 students have enrolled. "Usually, when I'm at a party, I stand so close to the DJ box and I keep wondering what is that guy doing? What are all those buttons made for? Why are they wearing headphones?" says Syrine, a student at the institution. "I jumped on the first opportunity to know more about it," she adds.

The DJ Academy has designed masterclasses that teaches multiple facets of DJing. Students learn how to mix, research music, set up tracks according to the beats per minute (BPM) and more. The academy also teaches sound engineering and design. "Once we have learnt what is necessary, we start to express our creativity and make our own production or own a piece of art," explains Linda Tounsi, a teacher at the academy.

In Tunisia, the electronic music scene is growing fast. But globally, the industry continues to be male-dominated. In 2018, only seven per cent of female DJs were in the lineups of 20 top festivals held around the world. "We still have this mentality that there are some jobs that are made for men and there are jobs that are made for women," Linda says. "I don't think that DJing is part of 'men's world'. I don't think any form of art is part of the men's world. I think all forms of art are for everyone."

Tunisia's women make up only 28 per cent of the workforce. The courses on offer at La Fabrique create opportunities for passionate young women. They can be a stepping stone to launch their careers both nationally and internationally. Around 30 per cent of the women enrolled in the academy have progressed into professional DJ careers, playing at festivals, private parties and clubs.

Olfa hopes that the DJ Academy will help change mentalities in the country. "The hardest part of my job is to make people aware of gender inequalities and also to change the mindset of people and the decision-making process," she says.

Art can be a powerful tool for activism, as Olfa knows. Alongside the academy, she launched FeMENA, a digital and art space in the MENA region for women. The DJ Academy also participated in the UN's '16 Days of Activism to end gender-based violence. They created '16 DJs of Activism', inviting professionals and female talent to take part in events and performances on social media and radio. They also staged a series of live sessions in partner clubs that shared their goal of promoting gender equality in Tunisia's electronic music scene.

In Tunisia, Olfa has seen the need for social reform in the area of gender inequity. Women's empowerment, she believes, will be the key to that change. She hopes that the DJ Academy will provide an organised and safe environment for women to learn, share their experiences, freely express themselves, support one another and prepare to be the next generation of DJs, sound producers and designers.

Meet the cholita skateboarders breaking down stereotypes in Bolivia