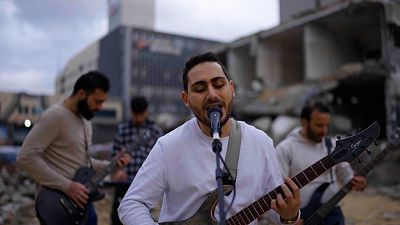 A group of young men working as accountants, lawyers and agronomists have founded what may be the first rock band in Gaza. Osprey V, named after the bird of prey, has entered the musical spotlight, singing about themes of war, pain and peace.

Their story started as just a hobby. With no youth music centres in Gaza, cousins, Moamen, Raji and Saed Jaru, decided to teach themselves, “without Youtube and Google, we would never have had a chance to even know about rock music”, says Raji.

They soon started performing and composing their own lyrics: “We used to jam together, then at some point, a lot of people saw what we did and enjoyed what we did. They asked us, ‘why don't you take this to the next level?’ It was like a childhood dream that we took to a professional level,” remembers bass player Moamen.

Launching a music career in Gaza definitely had its challenges. The band worked with scarce resources from early on, “we jammed for like an hour or half an hour, then the power would go out,” recalls Moamen. Before the opening of the first music store in the Gaza strip, they also struggled to find the right equipment. Then there was the lack of specialised studios to record their tunes.

Another obstacle for them was that they felt some people from Gaza were not accustomed or interested in Western music. Many objected to the genre that is so different from traditional Palestinian folklore, but still, that did not stop Osprey V. “Rock music worldwide is something that has been always stereotyped: people who scream. That is not rock music, rock music is a philosophy,” insists Moamen.

‘True expression of self’

Raji also points out that the genre originated from suffering and destruction during the First World War, and that no other form of music would be able to express the Palestinian suffering.

"We'll scream our pain, can you hear the call?" pleads their song ‘Home’. “This song tells our true feelings and emotions behind this word ‘home’, which we don’t really understand because we lack it,” said Moamen. Raji explains how every feeling they have, everything they have witnessed is a storyboard for the lyrics which they write to fully express themselves, “we try to go into depth of their pain, the depth of their deprivation.”

For Osprey V, getting their message to an international audience is essential. They sing in English so more people can clearly understand their struggle. Their main stage is social media to reach every corner of the world but they want to go a step further. “Our main dream as a band is to actually go into an international stage to deliver our music to the whole world,” says Raji. They hope to travel, gaining new experiences and participating in international concerts.

The band continues to work hard to be accepted in a sometimes conservative society but their first concert proved successful, with many people, including foreigners, attending the event in Gaza. They also were part of an online event called Live for Gaza. It brought music stars together, including Pink Floyd’s Roger Waters, to raise money for musicians in the Palestinian territories.

“We want to be an inspiration for musicians and artists here and abroad. We want to tell the world that we can overcome our struggles and communicate with each other in very beautiful ways,” says Moamen. With those ambitious goals, despite the obstacles and lack of support, Osprey V shows no signs of slowing down.