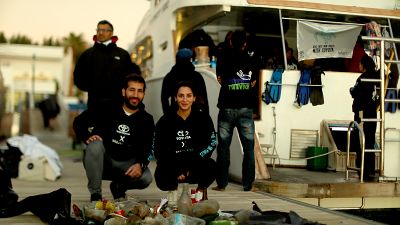 Seif Al Madanat and Beisan Alsharif met through the diving community in Aqaba. The duo shared the same passion for conserving the Red Sea. While exploring the Jordanian waters, the divers quickly realised that pollution is the biggest threat to marine life. “Without talking underwater, we both started collecting trash in our jackets, and when we got out of the dive, without saying any word, we were both happy that we were doing the same thing,” Seif tells Scenes.

Almost 14 million metric tons of plastic end up in the ocean every year. The United Nations estimates that around 800 species are affected by marine debris worldwide and 80 per cent of that waste is plastic.

Seif and Beisan saw the urgent need to clean the oceans, together they launched the non-profit, ProjectSeas. Their cleanup dives were made sustainable by collaborating with a local brand, Herb & Design, to create a limited edition candle. Each candle sold helps support the cleaning and maintenance of all 28 dive sites in Aqaba.

“The main objective of ProjectSea is basically to change the culture of disposal of waste. Try to create a culture of conscious consumerism. Try to see if we can recycle, upcycle and reduce the waste as much as possible,” says Seif.

The organisation regularly holds campaigns in Aqaba. More than 80 volunteers from 25 countries have splashed into the sea, with some travelling specifically to Jordan to assist in the cleanup. More than 16,000 plastic pieces, along with metal, glass, paper and clothing, have been collected so far.

“On our second cleanup dive, we were sorting the waste and trying to count the items. We saw a juvenile octopus escape from one of the cans, so we took it back to the sea, and we saw how important it is to keep our seas clean,” says Seif.

As a result of plastic getting into the sea, fish, seabirds, turtles, and marine mammals can become entangled in debris or eat it, which can cause them to drown, suffocate, or starve. Coral reefs can become infected with white band disease, which can lead to coral tissue destruction.

The passion of ProjectSea is gaining traction. Companies are eager to get involved and sponsor future clean-up dives.

Beisan also runs a community centre for Palestinian refugees alongside ProjectSea. By starting the production of tote bags, she could integrate both aspects of her life.

"I decided to produce tote bags made of upcycled products, and part of the proceeds go back to support the local women who actually put these bags together," she explained.

ProjectSea has big plans for the future. They hope to raise awareness about marine pollution and its effects on human life on social media platforms and educational materials targeted at young people. Beisan explained how they already see the results of their efforts.

"When you receive messages from the younger generation, sending us their pictures on the beach collecting trash, these success stories are actually what make me continue doing what I do," says Beisan.

The ProjectSea initiative aims to protect marine life in Aqaba, through positive cultural and lifestyle changes.