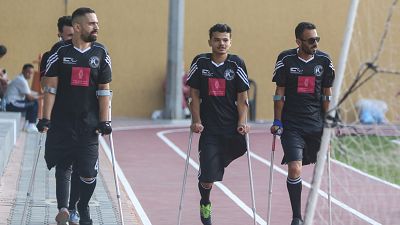 The last thing Rami Jundeya remembers is the siren of an ambulance. An Israeli missile injured Rami during an escalation of violence in Gaza in 2014. When he woke up in the hospital, he could not feel his left leg.

"I thought my life would stop after my injury. Before my injury, I used to play many sports, including football, basketball, and swimming," says Rami.

Rami woke up in the hospital and discovered his leg had been amputated. He was devastated. Football was the last thing on his mind, as he thought he would never be able to play sports again. That was until he came across Al Jazeera Sports Club, a community centre where people with disabilities play sports. The club has an amputee football team that competes in the region's amputee football league.

"The sport has changed my life. It gave me hope and made me feel that life is beautiful and even better than before," Rami tells Scenes.

Al Jazeera Sports Club was initially founded for able-bodied footballers. The amputee football team was established in 2014 after a series of explosions left many civilians without limbs in Gaza. Jalal Skaik, the team's coach, says that the club helps young amputees adjust to their new lives.

"The number of amputee cases has increased here, so many young amputees have started to join sports clubs like this," explains Jalal.

According to The International Red Cross, around 2000 amputees in Gaza sustained injuries due to border demonstrations in 2018. Many of these amputations were because of the lack of health funding in the Palestinian-controlled area.

Approximately two million Palestinians live in Gaza; the population has suffered years of blockades from neighbouring countries and cuts to foreign aid. Life is difficult for many amputees, yet the Al Jazeera Sports Club provides them with a place to grow and develop.

"We managed to form this team between the amputees and people with congenital disabilities. People greatly admired this initiative, and we hope it will continue," Jalal tells Scenes.

According to the United Nations, 38% of Gazans live in poverty. In addition, the average wage has declined by over 20% over the past six years, and many young people are unemployed. Due to these challenging circumstances, footballers often play without adequate shoes, uniforms and equipment.

Ahmed Abu Daken, an amputee footballer, says that the lack of resources in Gaza is particularly difficult for amputees. "These obstacles might not be as difficult for able-bodied people," he says, "but they are a source of struggle and frustration for people with missing limbs."

'Football is for everyone.'

Players in Gaza remain optimistic despite the challenges they face. Game rules have been adapted to accommodate their disabilities by the World Amputee Football Federation. Players can use pair of titanium crutches to compete in a physical seven-a-side game. Each match lasts 25 minutes and is played on a field three-quarters the size of a standard soccer pitch.

Mohammed Eleiwa, who lost one of his limbs in 2018, says playing football with crutches is empowering. "Crutches are a part of our everyday life. They enable us to get on with our lives. Football is for everyone," he says.

Al Jazeera Sports Club has become a space for community bonding and rehabilitation. It serves as a place where amputee players can unite to support each other.

"The amputee football players are an important part of my life. They are my brothers and my friends. They are always there for me," says Mohammed.

Several amputee footballers have gone beyond Gaza's borders and found success internationally. Some have been selected to play for the National Palestinian Amputee Football Team. Mohamed was selected to play professionally in the Turkish Amputee League.

"The team represents my soul. They have all my respect and pride," Jalal tells Scenes.

The players hope to continue playing football and dream of becoming international champions someday. Their determination comes from the challenging circumstances they have endured in Gaza.

"I dream of receiving a prosthesis so I can run again in marathons, which I strive to achieve," says Mohammed.

In their quest for sporting success, these amputees have become an inspiration not only in their community but to people with disabilities worldwide.

Meet the Tribal Athletes running for recognition in India