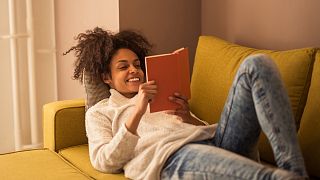 During the pandemic, many people have found comfort in books.   -   Copyright  bernardbodo/ Getty Images Pro via Canva
By Euronews  •  Updated: 30/12/2021

The crisp pages of a glossy new cookery book; the suspense of a sentence at the end of a true-crime chapter— books have provided a much-needed escape for many throughout the pandemic.

Despite its negative impact on independent bookstores, Amazon remains the world's biggest online bookseller, making its list of the best-selling books of 2021 a broad reflection of people's reading choices throughout the year.

How many of the following top ten have you read?

You'd think that more time inside would also mean more time to cook — but for those juggling a family, remote work and other general household chaos, making meals has been a challenge.

'Pinch of Nom's 100 Delicious, Slimming Recipes' provides solutions to such a problem, offering flavoursome one-pot wonders and other easy, yet nutritious meal ideas.

No wonder it's the fastest-selling cookbook of all time.

2. 'The Boy, The Mole, The Fox and The Horse' by Charlie Mackesy

This illustrated book by Charlie Mackesy tells the story of an emerging friendship between a boy, mole, fox and horse.

Tender images are accompanied by profound conversation, which touches on themes of relationships and hope, providing some much-needed comfort during uncertain times.

3. 'The Midnight Library' by Matt Haig

'The Midnight Library' is about a young woman named Nora whose life has fallen apart, which leads to a beautiful exploration of missed opportunities, the weight of decision making, anxiety and depression

British author Matt Haig has become a leading voice on the topic of mental illness, his imaginative storytelling swimming with vulnerability and inspiring solidarity and hope.

4. 'The Man Who Died Twice' by Richard Osman

It's been a good year for 'Pointless' presenter Richard Osman, whose 'Thursday Murder Club' mystery series — about a group of eccentric pensioners solving crimes — has become a bestseller around the world.

There are two books in the series so far: 'The Thursday Murder Club' and 'The Man Who Died Twice', with a third book due to be released in 2022.

Set in a charming retirement village in Kent, the characters feel comfortingly familiar, the humour very British and the atmosphere curious yet cosy.

6. 'Where the Crawdads Sing' by Delia Owens

A murder-mystery featuring romance and the quest for survival, 'Where the Crawdads Sing' has even been adapted into a film that's due to be released in 2022.

Did you know that the longest ever journey by an electric skateboard took place on Jan 6 2020 by Germany's Stefanie Hasbauer?

It's all the odd yet fascinating facts such as these that have made Guinness World Record books an annual tradition for kids and adults alike (especially at Christmas time).

The 2022 edition is the second installment in a collectable series with the illustrator Rod Hunt, and focuses on the environment in particular.

Another entry from Pinch of Nom, which is also the UK's most-visited food blog.

It was started by food bloggers and entrepreneurs Kay Featherstone and Kate Allinson, whose slimming comfort food recipes have proved extremely popular for their ease and tastiness, also creating a kind online community of support.

In a world of anxiety, there's comfort to be found in organising and crafting our own spaces.

This idea is at the heart of 'Tap to Tidy', a title that plays on the satisfying social media trend for tapping an Instagram Story to see a messy space suddenly transformed.

A key selling point is that it's written by singer and TV presenter Stacey Solomon, whose loveable best-friend vibes shine through and make this a comforting read that, in moments, inspires excitement and creativity once again.

This is the fastest-selling baking book of all time!

Back in 2014, English author and foodie Jane Dunn started what would become an extremely successful baking blog called 'Jane's Patisserie,' after training at Ashburton Chefs Academy.

From cinnamon rolls to triple chocolate brownies, every page is filled with delicious and easy-to-follow recipes that — is anyone else's stomach rumbling?