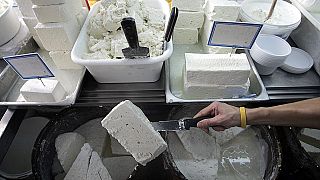 Greece has stated that feta -- made from sheep and goat milk -- has been part of its cultural heritage for 6,000 years.

And an advisor to the Court of Justice of the European Union agreed that Denmark had violated its obligations under EU law.

"Feta was registered as a protected designation of origin (PDO) in 2002," Advocate General Tamara Ćapeta said on Thursday.

"Since then, the name ‘Feta’ can only be used only for cheese originating in the specified geographical area in Greece and complying with the relevant product specification."

Ćapeta dismissed Denmark's argument that a national ban on exporting so-called "feta" would affect trade and stressed that "intellectual property rights" needed to be protected.

But the EU court adviser rejected claims that Denmark had deliberately violated its EU "duty of loyal cooperation".

The opinion comes three years after the European Commission -- backed by Greece and Cyprus -- sued the Danish state over the matter.

The Luxembourg-based court is set to issue a final ruling on the complaint in the coming months and is likely to back the Advocate General's opinion.