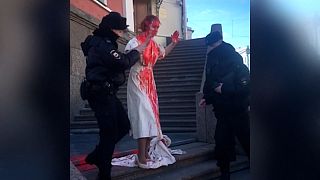 Yevgenia Isayeva stood on the steps of the municipal assembly, repeating the phrase “my heart bleeds.”

Yevgenia Isayeva stood on the steps of the municipal assembly, repeating the phrase “my heart bleeds.”

She also put a canvas at her feet with an appeal to passersby not to support the “bloodshed” in Ukraine.

On the same day, in Cyprus, members of the Ukrainian community as well as Cypriots and about 150 Russian citizens carried out a peaceful protest outside the Russian Embassy in Nicosia against the Russian invasion of Ukraine, expressing solidarity with Ukraine.

The protestors called for an end to the war and stressed that Ukraine is an independent country.

Russians who also took part in the event, sent the message that "Russia is not Putin."