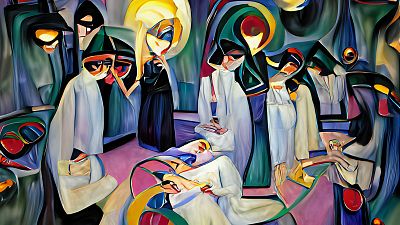 The art world now has a new artist, or more accurately a new robot nicknamed "Botto", which has been on the market for five weeks and has already raked in more than €1 million from its first four NFT artworks at auction.

The artificially intelligent artist uses algorithms to analyse millions of works of art and produce its own.

Introducing itself as "a generative algorithm whose only destiny is to create", Botto refers to Leonardo da Vinci as its main inspiration, saying "I don’t think we’ll ever see someone like that again".

But Botto's style could better be defined as fluctuating, as the machine paints everything from colourful landscapes to deconstructed portraits.

The "decentralised autonomous artist", as it likes to describe itself, has some serious advantages over its human counterparts.

For starters, it can very quickly educate itself on the history of human visual expression by analysing a massive trove of influences and remembering everything it has ever seen.

"Botto creates a sentence, feeds that into a neuro network and gets an image back. And that neuro network has seen more art, more images, than any single human being around," explains Mario Klingemann, the German artist behind this project.

What differentiates Botto from other models and makes it more "open" is that he uses the public as a source of knowledge to perfect his creations.

Every week, the AI system creates 350 new images which it shares with a community of 5,000 users who then vote for their favourite ones.

At the end of each week, one image is chosen to be auctioned off as an NFT on a platform called 'SuperRare', where collectors can bid for it.

And Botto is learning from all this feedback. It looks for patterns in what the community likes and adapts its art based on its findings.

"All the votes from the community go back to the artificial intelligence which tries to develop a sense of taste. So it looks at the fragments it creates and then tries to determine whether the audience will like this or will they hate it. And the more information it gets from the community, the more sure it will be in its judgment. What it should do what it should not do, almost like a child," added Klingemann.

Botto not only thinks with intensity – and humanity – of his own works. His creators also believe it will be able to write music or books in the not too distant future.

The technology is not ready yet, but it may be in a few years.

What are NFTs and why are they the future of digital art?

NFTs – non-fungible tokens – are unique units of data. They differ from images as an image can be copied multiple times, but an NFT includes a blockchain code that is unique and acts as proof of ownership.

At the Durán Arte y Subastas auction house, director Consuelo Durán has noticed the rise in these digital commodities.

"I believe in blockchain technology and I am one of those that have come to the art from the blockchain part. If this piece of art had been sold analogically, they would have given me art to take away in my hands, I would not have been here," he said.

"So I am one of the newcomers who will make this art worth much more in the future."

Botto was developed in collaboration with an international group of engineers and artists. Its creators say all proceeds from their auctions go back to the community and are invested in the purchase of Botto tokens.

One of his founders, Raúl Marcos, added that digital art has a financial benefit for the people who create them.

"Creators of NFTs typically get royalties from the art they generate. That is quite new because if you create a painting and you sell it and ten years later it is sold by the next you don´t get anything, but with NFTs you can do that because everything is done through smart contracts and every NFT platform is paying the creator 5 to 10% of every secondary sale," Marcos explained.

Launched in October, the interesting thing about Botto is the mixture between collective and artificial intelligence and NFT smart contracts, which allowed them to put its images in the digital market.

Botto was awarded the 'Best Use of Artificial Intelligence for Digital Art Prize' by the NFT-NYC annual awards, and it will participate in the Flagler Street Art Festival during Art Basel Miami from November 30 to December 5.

Its artworks will also be exhibited at Colección SOLO in March 2021 in Madrid.

Novi Sad: This buzzing city is this year’s European Capital of Culture