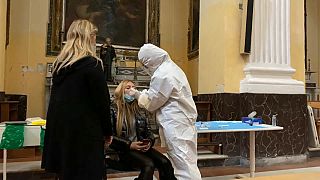 Italy's mass testing programme to track cases of coronavirus is stretching the public health system to its limit.

Poor organisation and widespread delays have left many people without tests, especially in poor neighbourhoods.

Health authorities cannot cope with the long queues of people asking to get tested. But private tests cost €60 to €80 and many cannot afford that.

Two associations in Naples are offering COVID-19 tests to local residents at a controlled price of €18 or even for free.

The free one is called a suspended swab test and takes its inspiration from a long-held tradition in Naples coffee shops.

"The suspended swab test means it is possible for anyone to donate the test to those who need it," said Angelo Melone, president of the Sa.Di.Sa. association, "It is a gesture of strong solidarity because people donate to strangers.”

The suspended swab test is inspired by the so-called ‘caffè sospeso’ or suspended coffee, a tradition in Naples. It sees people buy a coffee for themselves and, just before leaving, pay for an extra one, which is then given to someone who cannot afford the price.