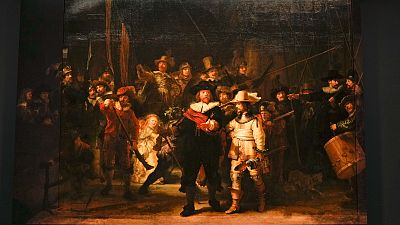 Rembrandt's biggest painting the Night Watch which just got bigger with the help of artificial intelligence, in Amsterdam, Netherlands, Wednesday, June 23, 2021.   -   Copyright  Peter Dejong / AP
By Euronews  with AFP  •  Updated: 21/01/2022

Rembrandt's 'The Night Watch', one of the most famous paintings in the world, has been taken down and removed from its frame for the first time since 1975 in Amsterdam's Rijksmuseum, as part of a multi-year restoration project.

The Netherlands' national museum announced on Wednesday that, after being removed from its wooden frame, the canvas will be stretched on a special aluminium frame over a period of three months, to remove some warping of the canvas.

"So what we've done is that we've taken 'The Night Watch from the wall, and put it on a specially-made table, and in the next few days we will start taking the canvas off its original stretcher, which is a stretcher that was added in the 1970s," explained Pieter Roelofs, head of painting and sculpture at the Rijksmuseum.

For the museum's restorers and curators, it was an emotional experience.

"For the first time in almost 50 years, 'The Night Watch' is flat on its belly," said the museum director Taco Dibbits. "Now it's striking just how big it is."

"So this is of course a very special painting. It's 'The Night Watch'. It's very special also for me to work on this painting, it's an honour," revealed Anna Krekeler, a conservator at the museum.

Completed in 1642, the painting, which measures 3.8 x 4.5 metres and weighs 337 kilograms, is rich in details. It portrays the captain of an Amsterdam city militia ordering his men into action.

For more than a year, digital camera specialists have been photographing the masterpiece as part of the restoration project.

The result is the largest and most detailed photo ever taken of a work of art, according to the museum.

"We were able to make the highest resolution photograph ever made of a work of art. And now the public can really zoom into the picture, dive into the picture and see nearly every pigment,"

"The public is enjoying it tremendously, especially at a time when the museum is closed because of the coronavirus. People can enjoy an 'at home' experience of 'The Night Watch'."

How long the restoration will take and all that needs to be done is still unclear.

"We will now be using all the knowledge we have accumulated in the past two and a half years of research on 'The Night Watch' to get the painting into the best possible condition so that people can enjoy the masterpiece for a very long time to come," explained Dibbits.

Until the restoration of the most famous work by Dutch master Rembrandt is complete, click here to discover all the details and secrets of 'The Night Watch'.

How does a Rembrandt masterpiece get restored?