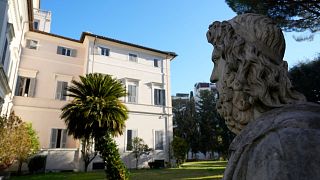 The sumptuous property belonging to Princes Ludovisi Boncompagni was auctioned under the jurisdiction of the Italian government for the value of €471 million.

Just shy of 75 per cent of this price was for the Caravaggio which adorns a monumental ceiling.

"No one participated in the auction," said representative Camillo Verde, who confirmed the next sale will take place on April 7 for a revised estimate of €376.8 million euros, a discount of 20 per cent.

Property of an ancient family of Roman nobility, the Villa Aurora, or Casino de l'Aurore, made headlines not only because of its cost, but also the fraught legal battles between Roman nobility about who could inherit it, resulting in the authorities stepping in.

A property blessed and cursed by opulence

Caravaggio's work (real name Michelangelo Merisi) dates from 1597, and can be found on the first floor of the house.

This oil painting by the master of the chiaroscuro – who died prematurely at 38-years-old – depicts Jupiter, Pluto and Neptune with the globe and zodiac signs in the center.

Caravaggio’s mural was commissioned by Del Monte as a ceiling for his alchemy room and is the only work of its kind.

In addition to the exceptional painting, this residence sits over 30,000ft2 in size and is located in the very center of Rome between the famous via Veneto, cradle of the Dolce Vita, and the Spanish Steps.

Why is the house under auction if nobody wants to buy it?

The auction was decided by a court in Rome to put an end to the bickering between the heirs of Prince Nicolo Ludovisi Boncompagni, head of this ancient family of Roman nobility who died in 2018.

The dispute opposes the third and last wife of the prince, Rita Jenrette Boncompagni Ludovisi, a colorful 72-year-old American who posed for Playboy, to the children born from his first marriage.

Many Italians would like the property to remain Italian rather than fall into the hands of a wealthy foreigner and are asking the State to acquire it.

But the investment is considerable in the context of the economic recovery initiated by the third largest economy in the eurozone after months and months of confinement and a slowdown in activity.

Under Italian law, the government can only exercise its right of pre-emption after it has actually been acquired by a private individual, within 60 days of the conclusion of the sale and offering the same purchase price.