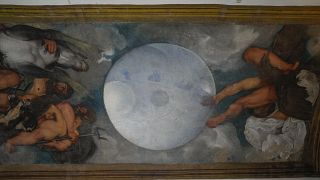 An elegant villa in the heart of Rome is set to be auctioned off next month for an estimated half a billion euros.

Not because it hosts a panoramic swimming pool, or gold doors and windows. This villa's hidden riches lie in its artwork – namely, the world's only mural painting by Baroque painter Caravaggio.

The 2.75-metre-wide mural was commissioned in 1597 by the diplomat and patron of the arts, Cardinal Del Monte, who asked Caravaggio, then in his early twenties, to paint the ceiling of a small room he used as an alchemy workshop.

A treasure trove of classic art

A stone's throw from the famous Via Veneto, the heart of the 'dolce vita' of the 1960s, Villa Aurora's 2,800 square metres, including a lush garden, will go up for auction on January 18.

A decision was made by an Italian court after a long inheritance dispute that followed the death of its former owner, Prince Nicolò Boncompagni Ludovisi in 2018.

As the site is protected by the Ministry of Culture, once a bid has been agreed at auction, the state will have the option of buying the property at the same price.

Caravaggio is only one part of the story of Villa Aurora.

Its future owner will inherit a number of ancient works, including a fresco by Giovanni Francesco Barbieri better known as Guercino, another Baroque artist, depicting Aurora, the goddess of dawn, after whom the villa is named.

There is also a Michaelangelo painting featuring Pan, a Greek deity of fertility.