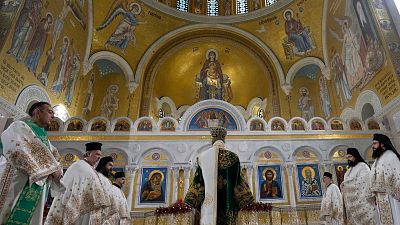 Oak logs are burned outside the church during prayer

Before the mass, many celebrated in front of the church by burning the Badnjak – an Orthodox tradition where an oak log is set on fire alongside its branches.

The tradition bears similarities to the burning of Yule in other European countries.

Everyone gathers to pray, sing and burn the traditional log which is believed to bring luck, happiness and love.

The log symbolises the tree which, according to tradition, shepherds brought to Joseph and Mary to set on fire and keep baby Jesus warm.

The tradition is observed across the majority of churches in Serbia as well as churches across Bosnia, Montenegro and North Macedonia.

Health measures in Serbia include mandatory face mask use indoors and and limits on gatherings, but few worshipers appeared concerned as they streamed into Saint Sava Temple.

No specific anti-virus measures were announced for Serbia's religious ceremonies despite a huge rise in infections apparently fueled by the omicron variant.

Serbia just reported more than 9,000 new cases for the past 24 hours, the highest daily number since the start of the pandemic.

Anna Gasser: the athlete pushing the boundaries of female snowboarding

The most striking photos of 2021 and the stories behind them