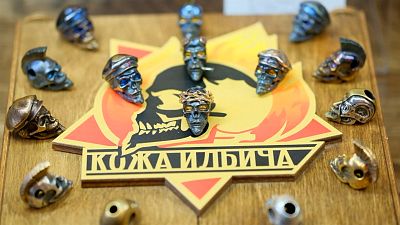 In Yekaterinburg, a Russian handicrafter is making beads shaped like the head of Soviet revolutionary leader, Vladimir Lenin.

At times the miniature metallic sculptures are philosophical, at other times sinister, but their creator Aleksey Zaslavskiy says they are his way of exploring different perceptions of Lenin.

Still revered by communists and many others in Russia, Lenin led the Bolshevik Revolution which transformed Russia's political system and lead to the eventual creation of the Soviet Union.

'At every moment, he is completely different'

There's a lot of variation in Zaslavskiy's project, titled Skin of Ilyich.

Customers can purhcase a Lenin head with a mohawk – a reference to Soviet history textbooks in which children would draw the hairstyle onto Lenin's portrait.

There's also Lenin-Superstar, which features a crown of thorns, a Christ-like image drawing parallels to the cult of the leader's personality and his eternal life in some people's hearts.

Alongside them are more sinister images. Lenin styled as fictional characters Terminator and Hellboy, playing out the suggestively demonic component of the Soviet leader's personality.

Zaslavskiy confesses he was worried they might be considered controversial when he started the business.

But so far, there haven't been any misunderstandings, he says.

According to Zaslavskiy his work combines meanings, depicting Lenin as both good and bad, both dead and "forever alive".

"It is absolutely this one moment, subjective perception of a historical personality that is important for me, because at every moment, he is completely different."

What are the beads used for and how much do they cost?

Zaslavskiy says he's one of the first in Russia to cast titanium jewellery and is excited about the results.

He has been making Lenin beads for about a year and has sold around 100 of them.

Zaslavskiy's clients vary – bikers and city workers, leftists and rightists, each seeing their own image of Lenin.

"A person comes to me and sees that I am selling beads, but as soon as he starts looking at them, he begins to see the images," he explains.

Some beads he creates are hung on knife handle strings, others for bracelets and chains.

Zaslavskiy, a biker himself and a fan of knives, has always loved the aesthetics but, he confesses, could not afford to buy expensive stylish beads.

How are the beads made?

Classic materials such as brass, bronze, gold and silver have already become familiar and boring, he says.

So, he also offers beads made of cobalt – either pure or in combination with other metals and is now mastering titanium – materials rarely used for this purpose.

The downside is the absence of any instructions or teaching aids, so the craftsman works by trial and error.

**Check out the video above to see Zaslavskiy's bead making process.
**