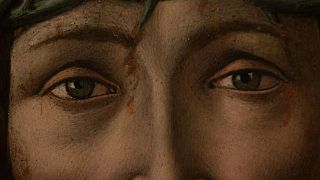 A painting by Renaissance artist Botticelli is expected to fetch more than $40 million (€35m) when it goes up for auction next month.

'The Man of Sorrows' is a depiction of Christ and has been held in a private collection for almost 60 years.

It was painted sometime around the late 15th or early 16th centuries.

Edoardo Roberti, Head of Department of Old Masters Paintings at Sotheby's, says the brooding artwork reflects a wave of religious fervour that engulfed the artist's home town at that time.

"Florence has been taken over both in a civic revolution, but also a religious revolution by the Dominican Friar Savonarola and his followers," he explains.

"Botticelli is swept up in these changes and we find a very profound shift in his artistic mood. So here we see a very human depiction of the Redeemer, of the Godhead, as Botticelli envisioned him later in life."

Botticelli's most famous works, such as The Birth of Venus, are beautiful, sumptuous affairs, full of colourful details to delight the viewer.

But as the artist aged and embraced religion, his style was markedly different.

"This later moment in Botticelli's career, we find the artist being much more direct. We do away with the courtly beauties of an earlier period, such as the 1480s, and we just have direct access, much more stark interpretation of what we're looking at," says Roberti.

"So here is the artist and us, the viewer, confronting and trying to relate to the artist's vision of God."

Earlier this year, Sotheby's sold another Botticelli - 'Young Man Holding a Roundel' - for a staggering €81.4 million ($92.2 million), an auction record for the artist.

It was last sold at auction in 1963 for just under €12,000 and has remained in the same private collection since then.

A rare find of the highest quality

"It did participate in a landmark exhibition in 2009 on Botticelli, but it's a picture little known by the public. So finally, we're having a chance to re-engage with it and its power."

The painting was previously thought to have been created by artists from Botticelli's workshop.

But it has since been deemed to be the work of the Florentine Master himself.

Sotheby's is confident of the accuracy of that attribution.

"Like so many Old Masters, there's very little documentary evidence for each painting. And even if a painting is signed, that can still lead to some question marks," explains Roberti.

"What one tries to do with a painting of this quality and an artist of this importance is to gain a broad consensus from the leading scholars of the moment, to present it to market presenting all the views of the relevant scholars. We have had extremely strong support from all involved about the beauty and importance of this autographed work by Botticelli."

'The Man of Sorrows' will be auctioned by Sotheby's in New York in January 2022.

Take a look at the video above to explore 'The Man of Sorrows'.