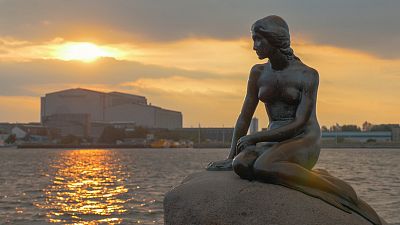 The Little Mermaid Statue in Copenhagen. Around 17,000 Greenlanders live in Denmark, according to Jens Heinrich from the Greenland Consulate in Copenhagen.   -   Copyright  Danr13/ CanvaPro
By David Mac Dougall  •  Updated: 28/12/2021

Greenlanders living thousands of kilometres from home will soon be able to hear news bulletins and important local information in their own language.

In December, Danish political parties agreed to a new budget that will see DKK7 million (approximately €940,000) allocated to develop a new radio station to deliver content in Greenlandic, aiming to reach the thousands of Greenlanders living in Denmark.

Until now they had only been able to access TV and radio broadcasts coming from Greenland, and campaigners say the new local news service will provide a much-needed public service for the community.

However, the exact form the project will take is still to be decided by the Ministry of Culture early in 2022.

“It can be a broadcast, it might be a podcast or something similar, but its purpose should be to strengthen the voices of the Greenlandic minority in Denmark,” says Aki-Matilda Høegh Damm, a Greenlandic politician in the Danish parliament who has spearheaded the initiative.

Who are the Greenlanders in Denmark?

The world’s largest island, Greenland — Kalaallit Nunaat — is a semi-autonomous territory, where the local government in Nuuk has taken increased responsibility for a broad range of issues, including policing, healthcare, education and the judicial system.

Former colonial power Denmark is still in charge of monetary policy, foreign affairs, and defence, and provides an annual subsidy worth billions of Danish Kroner.

“There are around 17,000 Greenlanders in Denmark and the number has risen from 12,000 just a decade ago, so there has been a large increase,” explains Jens Heinrich from the Greenland Consulate in Copenhagen.

“It’s a very mixed group. There are some retired people who move to Denmark, and quite a lot of Greenlandic students here as well,” he says.

“Or people who already got their degrees and are working in Denmark, maybe hoping to move back home someday.”

Camilla Siezing moved from Nuuk to Denmark with her family seven years ago, and says the four-hour time difference means that watching or listening to online news bulletins from Greenland’s public broadcaster, even in her own language, is "not always that relevant.”

During the pandemic, there’s been an added impetus to have accurate local information in Greenlandic.

“There’s a lot of Greenlanders in Denmark who are not fluent in Danish, so if there are new COVID-19 restrictions or new things that are local in Denmark, they might not understand the details. If they are explained in Greenlandic that would be great,” says Camilla, who is the President of Fællesforeningen Inuit, an umbrella group for Greenlandic organisations in Denmark.

There’s also been a lack of information among the Greenlandic community in Denmark about itself, which could be remedied with a new service: whether it’s a radio show or a podcast, online or broadcast via traditional radio signals.

“Right now, it’s all about who knows who, and who’s in what Facebook group and so forth. But we could reach more people if everybody listens to the new channel,” says Siezing.

Although the new service would be funded with money from the Danish government, it would be editorially independent, like Denmark’s public service broadcaster 'DR'.

“I’m quite excited about it and I’m excited to hear more about what content there will be, and I understand there’s a lot of people looking forward to this new radio,” Siezing adds.

Despite being part of the Kingdom of Denmark for more than 200 years, community members say there’s often a lack of education among Danes about Greenlanders and their way of life.

It was only at the end of 2020 when the Danish Government offered an official apology for a 1950s social experiment, which saw almost two dozen children taken from their families in Greenland to be ‘re-educated’ as Danes.

Many damaging stereotypes about Greenlanders persist in Denmark, a legacy of socio-economic disparity and historically high unemployment levels, and a direct result of the Greenlanders who are ‘seen’ or ‘unseen’ in Danish society.

“There’s 5-10% of Greenlanders here with social issues, maybe drinking too much or being homeless and that’s quite visible to Danes,” says Jens Heinrich from the Greenland Consulate in Copenhagen.

“If you are successful, if you have a degree, you are not seen. But if you are sitting on a bench and drinking you are seen, and that’s the perception in Denmark,” he adds.

Camilla Siezing says that when students from Greenland arrive in Denmark, there are often assumptions made about what their lives are like, whether their parents are alcoholics, or if they have other social problems.

“But it’s not like that for most of the students, because the ones who go to Denmark to study are the ones doing well. They get a lot of discriminating questions, I would say it’s more ignorance. They’re not taught about Greenland in school,” she explains.

“There’s a lot of people who think we still live in igloos, or ask 'do you ride polar bears?'”